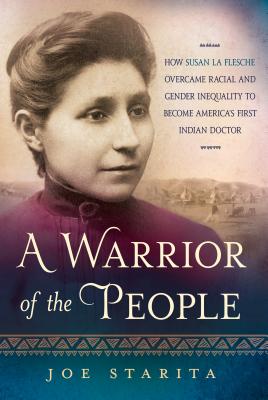 A Warrior of the People

"An important and riveting story of a 19th-century feminist and change agent. Starita successfully balances the many facts with vivid narrative passages that put the reader inside the very thoughts and emotions of La Flesche." —Chicago Tribune

On March 14, 1889, Susan La Flesche Picotte received her medical degree—becoming the first Native American doctor in U.S. history. She earned her degree thirty-one years before women could vote and thirty-five years before Indians could become citizens in their own country.

By age twenty-six, this fragile but indomitable Native woman became the doctor to her tribe. Overnight, she acquired 1,244 patients scattered across 1,350 square miles of rolling countryside with few roads. Her patients often were desperately poor and desperately sick—tuberculosis, small pox, measles, influenza—families scattered miles apart, whose last hope was a young woman who spoke their language and knew their customs.

This is the story of an Indian woman who effectively became the chief of an entrenched patriarchal tribe, the story of a woman who crashed through thick walls of ethnic, racial and gender prejudice, then spent the rest of her life using a unique bicultural identity to improve the lot of her people—physically, emotionally, politically, and spiritually.

Joe Starita's A Warrior of the People is the moving biography of Susan La Flesche Picotte’s inspirational life and dedication to public health, and it will finally shine a light on her numerous accomplishments.


Praise For A Warrior of the People: How Susan La Flesche Overcame Racial and Gender Inequality to Become America's First Indian Doctor…

"Dr. Susan La Flesche Picotte rose to the level of near-sainthood in her dedication to medicine and her work among her Omaha tribe. Starita tells her fascinating story with a skill that kept me turning the pages. Dr. Picotte’s life of heroism against the toughest odds deserves to be more widely known; thanks to this fine and passionate book it will be."—Ian Frazier, author of Great Plains and On the Rez

"An important and riveting story of a 19th-century feminist and change agent. Starita successfully balances the many facts with vivid narrative passages that put the reader inside the very thoughts and emotions of La Flesche. This rebel's dogged determination is something of a roadmap and definitely an inspiration to those trying to break through 21st century glass ceilings."—Chicagco Tribune

"A layered, nuanced portrait of this country's first American Indian doctor. Starita is a fine writer...and presents a layered portrait of her as a person with vulnerabilities and anxieties as well as dreams and determination. La Flesche’s story is moving and illuminating, and Starita has done it justice."—Minneapolis Star Tribune

“Thoroughly researched… Starita’s biography of this remarkable woman is both heartening and enlightening."—Booklist

"Rarely has biographer fallen more deeply in love with his subject. Starita’s admiration for Susan La Flesche shines through every story. As we read A Warrior of the People, we also become enamored with this intelligent, determined and hard-working woman of the Omaha nation. La Flesche devoted her life to educating herself and helping her people. By telling this important story, Starita has assured her a prominent place in American history. Our citizens will remember her the way we remember Eleanor Roosevelt, Helen Keller, Mother Jones and Rosa Parks. Bravo, Joe. Thank you for introducing all of us to a new hero."—Mary Pipher, New York Times bestselling author of Reviving Ophelia

“In a literary landscape awash in portraits of Native Peoples from male perspectives —from Custer to Sitting Bull, from Comanche Warriors to Buffalo Soldiers—this extraordinary story offers something else: What was it like to be an Omaha & Ponca woman in the late-1800s, navigating the collision between Manifest Destiny and Native nations and cultures? How do you become a doctor of Western medicine when white male America declares that the stress of college renders women infertile? How does it feel to be alone on the prairie, saving lives and wondering if you will die an old maid? If you’re looking for a taut, haunting, inspiring, honest narrative that answers these questions—and richly showcases a strong Native woman leaning in a century before that term existed—look no farther.” —Dr. Suzan Shown Harjo (Cheyenne & Hodulgee Muscogee), President, The Morning Star Institute

"A Warrior of the People recounts the life of Susan La Flesche with the esteem and honor she deserves as America's First Indian Doctor. Joe Starita weaves an intricate, in-depth look into the mind, heart, and soul of this indomitable true Medicine Woman and I would recommend this book to all for its integrity and delicate humanity."—Irene Bedard, actor, producer, and star of "Smoke Signals

JOE STARITA was the New York Bureau Chief for Knight-Ridder newspapers and a veteran investigative reporter for The Miami Herald. His stories have won more than two dozen awards, one of which was a Pulitzer Prize finalist for local reporting. For the last nine years, he has held an endowed chair at the University of Nebraska’s College of Journalism. The Dull Knifes of Pine Ridge won the MPIBA Award and received a second Pulitzer nomination. He is also the author of “I am a Man.”
Loading...
or
Not Currently Available for Direct Purchase