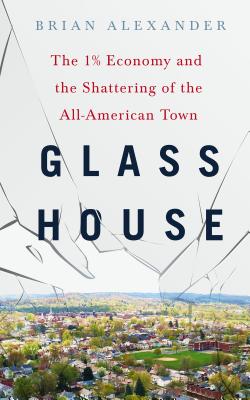 For readers of Hillbilly Elegy and Strangers in Their Own Land

WINNER OF THE OHIOANA BOOK AWARDS AND FINALIST FOR THE 87TH CALIFORNIA BOOK AWARDS | NAMED A BEST/MOST ANTICIPATED BOOK OF 2017 BY: New York Post • Newsweek • The Week • Bustle • Books by the Banks Book Festival • Bookauthority.com

The Wall Street Journal: "A devastating portrait...For anyone wondering why swing-state America voted against the establishment in 2016, Mr. Alexander supplies plenty of answers."

The New Yorker : "Does a remarkable job."

Beth Macy, author of Factory Man: "This book should be required reading for people trying to understand Trumpism, inequality, and the sad state of a needlessly wrecked rural America. I wish I had written it."

In 1947, Forbes magazine declared Lancaster, Ohio the epitome of the all-American town. Today it is damaged, discouraged, and fighting for its future. In Glass House, journalist Brian Alexander uses the story of one town to show how seeds sown 35 years ago have sprouted to give us Trumpism, inequality, and an eroding national cohesion.

The Anchor Hocking Glass Company, once the world’s largest maker of glass tableware, was the base on which Lancaster’s society was built. As Glass House unfolds, bankruptcy looms. With access to the company and its leaders, and Lancaster’s citizens, Alexander shows how financial engineering took hold in the 1980s, accelerated in the 21st Century, and wrecked the company. We follow CEO Sam Solomon, an African-American leading the nearly all-white town’s biggest private employer, as he tries to rescue the company from the New York private equity firm that hired him. Meanwhile, Alexander goes behind the scenes, entwined with the lives of residents as they wrestle with heroin, politics, high-interest lenders, low wage jobs, technology, and the new demands of American life: people like Brian Gossett, the fourth generation to work at Anchor Hocking; Joe Piccolo, first-time director of the annual music festival who discovers the town relies on him, and it, for salvation; Jason Roach, who police believed may have been Lancaster’s biggest drug dealer; and Eric Brown, a local football hero-turned-cop who comes to realize that he can never arrest Lancaster’s real problems.


Praise For Glass House: The 1% Economy and the Shattering of the All-American Town…

"There are some books that I think of as 'wake-up calls.' I’m talking about books that not only tell me something I don’t know, but that challenge and reconfigure a previously held belief, allowing me to see the world I live in with greater clarity and understanding...Glass House reveals that the Anchor Hocking Glass Co. of Lancaster, Ohio, wasn’t done in by the forces of globalization, but by private equity investors from Wall Street who drained the lifeblood from the company like a bunch of vampires, profiting mightily in the process." —John Warner, Chicago Tribune

"A masterful detailing of the brokenness of the venture-capital-rooted economy. This is my favorite out of all the books I read in 2017." —This Appalachia Life

"Does a remarkable job." —The New Yorker

"A field study looking at the declining fortunes of the industrial city of Lancaster, Ohio." —The Toronto Star

"Glass House is among the best of the books to hit shelves in the last several years exploring what’s happened to the nation and the role that greed and the collapse of once solid institutions played in the demise of small-town, middle-class America. Among the others are George Packer’s The Unwinding and J.D. Vance’s Hillbilly Elegy." —Newsweek

"[The book] really comes alive in Alexander’s portraits of the people caught up in the town’s unraveling...If you want to understand the despair that grips so much of this country, and the love of place that gives so many the strength to keep going, Glass House is a place to start." —Christian Science Monitor

"A valuable contribution...Lays out a step-by-step account of Anchor Hocking’s slide, benefitting not only from Alexander’s strong reporting, but from candid interviews with key players. What is revealed is a complex system – Alexander argues it is deliberately complex - that allows savvy investors to make relatively small, highly leveraged bets on companies like Anchor Hocking." —Forbes

"Gripping...There are those who argue that leveraged acquisitions and restructurings of the sort that Anchor Hocking has endured make companies more efficient and steer capital to better uses...Alexander makes a persuasive case, though, that from the perspective of Lancaster, it’s been one big fleecing." —Bloomberg Businessweek

"For those still trying to fathom why the land of the free and the home of the brave opted for a crass, vituperative huckster with an unwavering fondness for alternative facts instead of the flawed oligarch Democrats served up, Brian Alexander has a story for you." —The Pittsburgh Post-Gazette

"Lancaster, Ohio, was declared the All-American Town by Forbes in 1947; its Anchor Hocking Glass Company was the foundation of a healthy, booming community. The town began to crumble as the factory shut down, as with too many other once-vibrant American hubs, leaving its citizens dreaming of the good old days. This well-reported book is all the stronger given the author’s connection to it: Lancaster is Alexander’s hometown. Shades of JD Vance’s 'Hillbilly Elegy.'" —The New York Post

"Reads like an odd—and oddly satisfying—fusion of George Packer’s The Unwinding and one of Michael Lewis’ real-life financial thrillers." —Laura Miller, Slate

"A devastating portrait...For anyone wondering why swing-state America voted against the establishment in 2016, Mr. Alexander supplies plenty of answers." —The Wall Street Journal

"An examination of a town in Ohio that quite literally fell apart. From drug dealers to cops, from industry to finance, Alexander goes deep into the heart of what ails us and takes no prisoners." —Newsweek's "The Week in Reading"

"Lancaster, Ohio, is a town built around the Anchor Hocking Glass Co., which once employed more than 5,000 people. The company and the town itself are now shadows of their former selves. Alexander tells a riveting story of how they got that way, and what it all means for the people who live there." —The Rotarian

"If you liked Hillbilly Elegy, this should be next on your list." —The Oklahoman

"Shows in fine-grained detail how the American dream of opportunity and fairness died in Lancaster and in similar towns all across the middle of the country...Glass House has the style and structure of a grand panoramic novel as Alexander follows a cast of characters located in every strata of Lancaster society." —Sojourners

"Alexander sheds light on how white, working-class Americans came to lose faith in the institutions of our democracy and in the basic social contract...To read Glass House is to understand how hollow it is to take satisfaction in any comeuppance for white working-class voters from an administration that embodies many of the forces that caused their problems in the first place." —Ruth Conniff, The Progressive

"It’s the book Hillbilly Elegy should have been. It’s unsettling and unforgiving, but so is its subject." —Matt Reed, Inside Higher Ed

"Alexander deftly shows how Lancaster represents the collapse of the American dream in microcosm. The other Ohio. The other America. No New Deal awaits them. Their predicament is not covered on the evening news. But they have Trump." —Inequality.org

"A well documented examination of how this once flourishing Ohio town became something else altogether." —Dayton Daily News

"A particularly timely read for our tumultuous and divisive era." —Publishers Weekly

"Those mystified by the election of Donald Trump could well start here...A devastating and illuminating book that shows how a city and a country got where they are and how difficult it can be to reverse course." —Kirkus Reviews (starred review)

"[An] essential book to understand American reality and politics." —The Washington Book Review

"Offers insights into how economic trends are tied to the financial and health problems plaguing many middle- and low-income Americans." —CBS News

"Brian Alexander's moving new book "Glass House" explores how the undermining by venture capital of once-enviable factory jobs in Lancaster, Ohio, has nearly killed that once-thriving town. You could write the same book about half of the country." —Chris Jones, The Chicago Tribune

"As Alexander carefully documents, Anchor Hocking and Lancaster were not undone by foreign competition, but by domestic corporate raiders, unshackled from regulations during the Reagan administration." —John Warner, The Chicago Tribune

"Emotionally striking...Alexander has combined his considerable journalistic talent with love for his broken hometown, producing an incredible, unshaking look at the true story of the American working class." —Booklist

"[Alexander] moves the story along with the force of a novel, interweaving the saga of the business itself with the lives of four friends." —Economic Principals

"So few journalists today spend time in America’s small towns, even though the people residing in them represent roughly half of the American population. In his remarkably nuanced Glass House, Brian Alexander gives readers an imbedded, close-up view of one iconic Ohio town — his hometown — that illuminates the lives that most politicians and urban dwellers seem to have forgotten. Part sociological study and part investigative business reporting, this book should be required reading for people trying to understand Trumpism, inequality, and the sad state of a needlessly wrecked rural America. I wish I had written it." —Beth Macy, author of Factory Man and Truevine

“Brian Alexander’s Glass House dramatizes vividly how a half-century of economic ‘progress’ dismantled America’s once-sturdy middle class. By focusing his narrative on the inhabitants of Lancaster, Ohio, Alexander personalizes this familiar story in a compelling, often surprising, and utterly heartbreaking way.”—Timothy Noah, author of The Great Divergence: America’s Growing Inequality Crisis and What We Can Do About It

"Brian Alexander’s Glass House reads more like a great novel. But I’ve driven by the Anchor Hocking plant (the Glass House of the title) at least several times a year since the mid-70s and seen its decay firsthand. Glass House is a fascinating, multi-layered, and superbly written account of how politics, corporate greed, low wages, and the recent heroin epidemic have nearly destroyed a once prosperous Midwestern city. This is a must read for anyone interested in really understanding the anger and frustration of blue collar workers and the middle class in America today." —Donald Ray Pollock, author of The Heavenly Table and The Devil All the Time

"Glass House is a compelling and harrowing look at the corrosion of the social and economic institutions that once held us all together, from the corporate boardroom to the factory floor. It's the most heartbreaking tale of a city since Mike Davis's City of Quartz." —Victor Fleischer, Professor of Law, University of San Diego, and New York Times columnist

"A compassionate but clear-eyed description of how deindustrialization, financial speculation, union-busting and deregulation undermined the social fabric of Alexander's home town, illustrated with gripping personal stories." —Stephanie Coontz, author of The Way We Never Were: American Families and the Nostalgia Trap

"An an extraordinarily important book at the exact moment it is most needed...Glass House concludes that, rather than some ill-explained and spontaneous decision of working people to suddenly become shiftless and lazy, there are actual real, straightforward and understandable institutional reasons for Lancaster's decline...Please, read Glass House. Read it especially if you read Hillbilly Elegy... a smart, sensible, approachable and eye-opening book that treats a complex topic with necessary sophistication while treating the real human beings at its center with the respect they deserve." —Craig Calcaterra

Brian Alexander has written about American culture for decades. A former contributing editor to Wired magazine, he has been recognized by Medill School of Journalism's John Bartlow Martin awards for public interest journalism, and by other organizations. He grew up in Lancaster, with a family history in the glass business. He lives in California. Brian is the author of Glass House.
Loading...
or
Not Currently Available for Direct Purchase