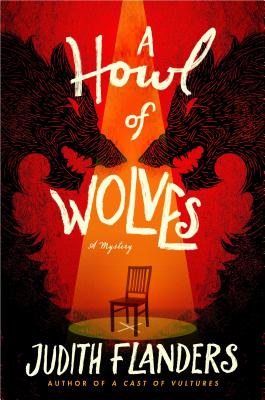 A Howl of Wolves

“Whip-smart” (Louise Penny) amateur sleuth Samantha Clair returns in A Howl of Wolves, a mystery from Judith Flanders, the New York Times bestselling and critically acclaimed author of A Murder of Magpies.

Sam Clair figures she’ll be a good sport and spend a night out at the theater in support of her upstairs neighbors, who have small parts in a play in the West End. Boyfriend (a Scotland Yard detective) and all-round good sport Jake Field agrees to tag along to what is apparently an extra-bloody play filled with dramatic, gory deaths galore. So Sam expects an evening filled with faux fatalities. Until, that is, the curtain opens to the second act, revealing a dummy hanging from the rafters, who’s been made up to look suspiciously like Campbell Davison, the director of the production.

When Sam sees the horrified faces of the actors onstage, she realizes that this is indeed not a dummy, but Davison himself—and this death is not part of the show. Now everyone wants to know: who killed Campbell Davison? As Sam learns more about the murdered man, she discovers that he wasn’t all that well-liked amongst the cast and crew, so the suspect list grows. The show must go on—but Sam knows a murderer must be apprehended, so she sets out to find out what happened, and why.

"Flanders' easygoing writing style, her clever plotting, and the presence of the engaging lead, Sam, who continues to impress with her nimble intellect and resilient personality...make this series more than the usual amateur-sleuth fare. This is a series that belongs in the hands of Rhys Bowen readers."—Booklist

"Flanders gives readers a fascinating backstage look at the theater and insight into the amusing machinations of the English publishing world."—Publishers Weekly

"London book editor Sam Clair is like a sleuthing Bridget Jones, one of the more delightful mystery series leads to emerge in recent years. An entertaining puzzle, but as with Flanders previous books, it's Sam's often laugh-out-loud wry internal, and sometimes external, dialogue that's the real appeal of the series."—Cleveland Plain Dealer