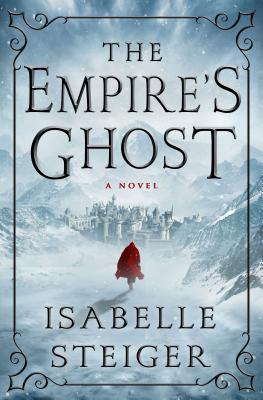 A Novel (Paths of Lantistyne #1)

Isabelle Steiger has crafted a powerful and masterful debut with The Empire's Ghost, the first book in a haunting new epic fantasy series.

The empire of Elesthene once spanned a continent, but its rise heralded the death of magic. It tore itself apart from within, leaving behind a patchwork of kingdoms struggling to rebuild.

But when a new dictator, the ambitious and enigmatic Imperator Elgar, seizes power in the old capital and seeks to recreate the lost empire anew, the other kingdoms have little hope of stopping him. Prince Kelken of Reglay finds himself at odds with his father at his country’s darkest hour; the marquise of Esthrades is unmatched in politics and strategy, but she sits at a staggering military disadvantage. And Issamira, the most powerful of the free countries, has shut itself off from the conflict, thrown into confusion by the disappearance of its crown prince and the ensuing struggle for succession.

Everything seems aligned in Elgar’s favor, but when he presses a band of insignificant but skilled alley-dwellers into his service for a mission of greatest secrecy, they find an unexpected opportunity to alter the balance of power in the war. Through their actions and those of the remaining royals, they may uncover not just a way to defeat Elgar, but also a deeper truth about their world’s lost history.


Praise For The Empire's Ghost: A Novel (Paths of Lantistyne #1)…

"In The Empire's Ghost, Isabelle Steiger has created a tapestry of compelling characters in a world that feels steeped in its own history. It's the kind of book that you sink into, that envelops you and compels you to read more. I can't wait for the sequel!"—Sarah Beth Durst, author of The Queen of Blood

"Steiger’s enjoyable epic fantasy debut weaves in and out of the lives of people on all sides of the struggle to determine the destiny of a continent.... Steiger handles a complex plot and a multitude of viewpoints neatly and well. Revelations about the world and the characters are placed at suspenseful intervals, and the story raises many interesting questions..." —Publishers Weekly

"Each character feels unique and compelling to the reader, with enough humorous banter to keep the darkness at bay.... The female characters are fully realized, flaws and all, as they hold their own in a struggle for domination, and the royal families are at odds with each other but united in their quest for understanding their magical history. The pace is brisk, and Steiger drops in hints and clues along the way to keep the reader tantalized with wondering how all the plots and traps will play out. A well-crafted tale that is ripe for a sequel." —Booklist

"I like the way Steiger sets up her group and then splits it leaving each something important to do for the plot. Her reluctant heroes are probably the strongest characters. She weaves real limitations into her characters. There is no perfect hero/heroine, there are flaws and individual foibles. These attributes make the characters relatable to readers.... A solid debut for Steiger." —SFRevu

"In The Empire's Ghost, Steiger has succeeded in crafting a fantasy novel at once familiar and refreshing in its refusal to adhere to any one trope of the genre. Female characters are more than mere pawns to be married to other nations; friendships and loyalties lie in a grey area, open to contextual interpretation; politics are at once a driving force of the plot yet far removed from the day-to-day life of citizens. Most impressively, Steiger succeeds in managing a multitude of characters and complexities in a way that, though overwhelming at times, is never sloppy or confusing.... A debut fantasy novel features powerful female characters, detailed worldbuilding and a complex narrative that will leave fans hungry for more." —Shelf Awareness

ISABELLE STEIGER was born in the city and grew up in the woods. She received her first notebook when she was eight, and she’s been filling them up ever since. She lives in New York, though her erstwhile companion, a very moody gray cat, has since retired and moved to Florida. The Empire’s Ghost is her first novel.
Loading...
or support indie stores by buying on