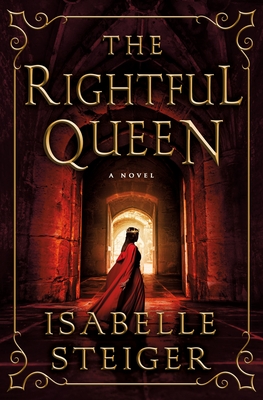 A Novel (Paths of Lantistyne #2)

The second book in Isabelle Steiger's epic fantasy series, which weaves together the lives of the haves and the have-nots—both desperately fighting to reassemble the remains of a fallen empire.

The Rightful Queen returns readers to the territories of Lantistyne. Imperator Elgar has brought war to the continent once again, and the rogues of the Dragon’s Head, once forced into his service, are scattered to the winds, wracked by tragedy and struggling to reunite.

While a cornered King Kelken grows increasingly desperate, Arianrod Margraine, the brilliant but outmanned marquise of Esthrades, devises a plan to stretch Elgar’s forces thin and turn the tide of battle in their favor. But when the sheltered queen of Issamira is driven from her throne by a long-simmering plot and the use of forbidden magic, Arianrod faces an even more pressing crisis.

Adora Avestri is more than the rightful queen of Issamira, more even than the key to defeating Elgar on the field—she has drawn the attention of beings older than Lantistyne itself, who possess hidden knowledge Arianrod has long desired. But if the queen and the marquise hope to survive long enough to learn it, Adora must find the strength to claim her birthright once and for all, and Arianrod must match wits and magic with a foe she has never before encountered: an equal.

The Rightful Queen is another example of Isabelle Steiger's powerful writing, full of intricate characters and complex world-building.


Praise For The Rightful Queen: A Novel (Paths of Lantistyne #2)…

"Fans who miss the political intrigue of Game of Thrones or the complex worldbuilding of Mercedes Lackey will find plenty here to hold them over." —Publishers Weekly

"In The Empire's Ghost, Steiger has succeeded in crafting a fantasy novel at once familiar and refreshing in its refusal to adhere to any one trope of the genre. Female characters are more than mere pawns to be married to other nations; friendships and loyalties lie in a grey area, open to contextual interpretation; politics are at once a driving force of the plot yet far removed from the day-to-day life of citizens. Most impressively, Steiger succeeds in managing a multitude of characters and complexities in a way that, though overwhelming at times, is never sloppy or confusing."—Shelf Awareness

ISABELLE STEIGER was born in the city and grew up in the woods. She received her first notebook when she was eight, and she’s been filling them up ever since. She lives in New York, though her erstwhile companion, a very moody gray cat, has since retired and moved to Florida. The Empire’s Ghost is her first novel.
Loading...
or
Not Currently Available for Direct Purchase