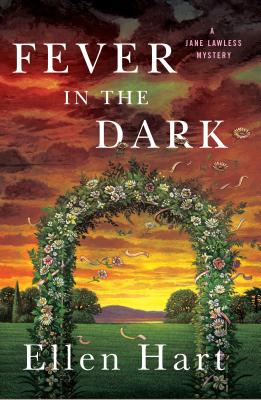 Fever in the Dark

In FEVER IN THE DARK by MWA Edgars Grand Master Ellen Hart, Fiona and Annie return home from their one year anniversary trip to discover that their poignant proposal video has been posted on YouTube and has garnered hundreds of thousands of hits. The video is on the verge of going viral, and there’s enormous media interest in Fiona and Annie, as their fame comes just on the heels of the Supreme Court’s decision to legalize gay marriage across the country. As some of the attention starts to turn vicious, Fiona pulls in an old friend, private investigator Jane Lawless, to help separate the harmless threats from the potentially harmful.

As the media storm continues to grow, Fiona revels in the attention, but Annie is furious. Fiona has always known that Annie has secrets, but her newfound notoriety threatens to bring Annie's past straight to their door. And then, when a murder occurs and Annie and Fiona are both suspects, it’s up to Jane to prove their innocence…although the more she learns, the more she starts to wonder whether they actually are innocent.

“Another wonderfully plotted and impeccably written page-turner…Everything you’ve come to expect from Hart—arguably one of the best lesbian mystery writers out there—is in this book, including Lawless’s requisite bruised ribs and concussion and a mystery that keeps you guessing.”—The Advocate on The Grave Soul

“Hart, the veteran crime writer, presents her central character, Jane Lawless, with such consistent and off-handed good humour that readers hardly notice the trails she and her character have blazed…The plot in the new book, gossipy and clever, features one cold case and another that’s hot and scandalous.”—The Toronto Star on The Old Deep and Dark

“Engrossing.”—Publishers Weekly on The Old Deep and Dark

ELLEN HART, named the 2017 Mystery Writers of America’s Grandmaster, is the author of more than thirty mysteries, many of them featuring private investigator Jane Lawless. Entertainment Weekly has called her “a top novelist in the cultishly popular gay mystery genre.” She has won multiple Minnesota Book Awards, and has been nominated twenty-three times for the Lambda Literary Award, winning six. She lives in Minneapolis, Minnesota, with her partner of forty years.
Loading...
or
Not Currently Available for Direct Purchase