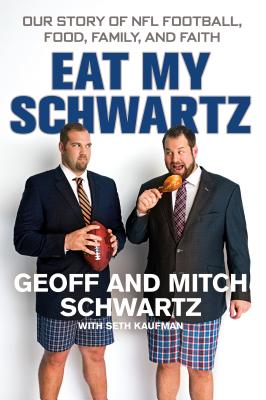 Our Story of NFL Football, Food, Family, and Faith

The first Jewish brothers in the NFL since 1923 take readers inside their lives and into the locker rooms in a revealing book on football, food, family, and faith.

Geoff and Mitchell Schwartz are the NFL’s most improbable pair of offensive linemen. They started their football careers late, not playing a down of organized football until they joined their low-key high school program. Despite all that, they wound up at top-tier college programs and became the first Jewish brothers in the league since 1923.

In Eat My Schwartz, Geoff and Mitch talk about the things that have made them the extraordinary people that they are: their close-knit and supportive family, their Jewish faith and traditions, their love of the game and drive for excellence and, last but not least, the food they love to eat, whether at home or on the road. Theirs is an inspiring story not just for every football fan but for everybody wanting to figure out what it takes for dreams to come true—and how to stay well-fed throughout the process.


Praise For Eat My Schwartz: Our Story of NFL Football, Food, Family, and Faith…

"An outstanding book . . . . Powerful and at times emotional . . . . The book is humorous, smart and takes you inside NFL locker rooms. . . . This was, easily, one of the most unique and well-done books about NFL life I've ever read. And unlike a lot of football books, it actually gives you a good look inside NFL life." —Mike Freeman, Bleacher Report

Detroit Lions offensive guard GEOFF SCHWARTZ was drafted by the Carolina Panthers in 2008 after anchoring the line at right tackle for three years with the Oregon Ducks. An eight-year NFL veteran, he signed with the Lions in 2016.

Kansas City Chiefs offensive tackle MITCH SCHWARTZ earned All-Pac 12 Conference and Academic All-Conference honors at Cal-Berkeley. He was drafted by the Browns in 2012 and played every single offensive down while on the team. He joined the Chiefs in 2016.

SETH KAUFMAN is an author and has written for the New Yorker and The New York Times, among others.
Loading...
or
Not Currently Available for Direct Purchase