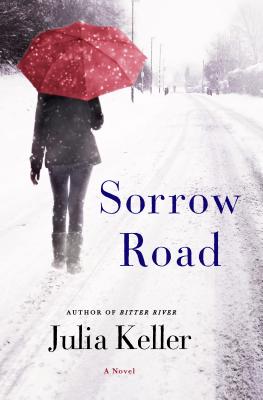 In Sorrow Road, the latest mystery from Pulitzer Prize-winning writer Julia Keller, two stories—one set in the turbulent era of World War II and one in the present day—are woven together to create a piercingly poignant tale of memory and family, of love and murder.

Bell Elkins, prosecuting attorney in Acker’s Gap, West Virginia, is asked by an old acquaintance to look into the death of her beloved father in an Alzheimer’s care facility. Did he die of natural causes—or was something more sinister to blame? And that’s not the only issue with which Bell is grappling: Her daughter Carla has moved back home. But something’s not right. Carla is desperately hiding a secret.

Once again, past and present, good and evil, and revenge and forgiveness clash in a riveting story set in the shattered landscape of Acker’s Gap, where the skies can seem dark even at high noon, and the mountains lean close to hear the whispered lament of the people trapped in their shadow.

“Sorrow Road continues the high standards that Keller has established with her series. Sorrow Road, like her other novels, is a story about a community comprised of very personal stories, each as unique as each individual.”—Associated Press

“The setting and the tone will appeal to fans of both Sharyn McCrumb and Julia Spencer-Fleming, and the introspective protagonist and literary quality recommend it to followers of Tana French and Louise Penny. Another outstanding entry in a superb series.”—Booklist (starred review) on Sorrow Road

"A beautifully crafted mystery in which Keller explores love, hate, and poverty in a place of stunning natural beauty."—Kirkus (starred) on Last Ragged Breath

"What particularly distinguishes Julia Keller's series about Bell Elkins, a West Virginia prosecutor, is its sense of social conscience...powerfully affecting."—USA Today on Summer of the Dead

"Keller crafts a cracking whodunnit with many a red herring, but her real accomplishment is the unflinching depiction of rural poverty and the ways the inhabitants of Acker's Gap hold on to their dignity despite few and terrible options."—Oprah.com on Summer of the Dead