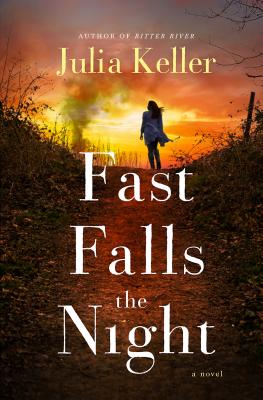 Based on a real-life event, Pulitzer Prize-winner Julia Keller’s latest Bell Elkins novel Fast Falls the Night takes place in a single 24-hour period, unfurling against the backdrop of a shattering personal revelation that will change Bell’s life forever.

The first drug overdose comes just after midnight, when a young woman dies on the dirty floor of a gas station bathroom. To the people of the small town of Acker’s Gap, West Virginia, it is just another tragedy. It is sad—but these days, depressingly familiar.

Prosecutor Bell Elkins soon realizes that her Appalachian hometown is facing its starkest challenge yet: a day of constant heroin overdoses from a batch tainted with a lethal tranquilizer. While the clock ticks and the bodies fall, Bell and her colleagues desperately track the source of the deadly drug—and engage in fierce debates over the wisdom of expending precious resources to save the lives of self-destructive addicts.

“Book clubs looking for a chilling mystery based on true events will want to pick up Julia Keller’s novel.”
--Bookish

“Keller's prose is so pure that her exploration of the desperate scourge of drugs and poverty and her forecast of a grim future for her heroine is a joy to read. “
- Kirkus Reviews (starred review)

“Keller’s series featuring Bell Elkins is remarkable for its humanity and its fully realized characters. Keller’s finely honed prose and emotional depth mark this series as exceptional in the world of crime fiction.”
--Booklist (starred review)

“This literary trip to West Virginia can be tough and heart-breaking but oh, so worthwhile. Highly recommended.”
-- Joyce’s Mystery and Fiction Reviews

"The 24-hour time frame imbues a sense of urgency to the plot as Keller shows the day’s events through various points of views... A Pulitzer Prize winning journalist, Keller again perfectly captures a community that, despite its struggles, will survive."
-- Associated Press

“The characters in the novel, and the plot itself, are mesmerizing, and you will keep reading without let up until the last page. And even then, you’ll be left wondering.”
--Marilyn’s Mystery Reads

“Keller does a terrific job of rubbing our faces in the troubles of her hometown – of America’s hometowns.”
-- New York Times

“Fast Falls the Night is undoubtedly dark and gritty, but it's also so beautifully and humanely written that a glimmer of hope is sure to light in every reader.”
-- Shelf Awareness


“She builds her plot skillfully to a conclusion that delivers multiple shocks and raises questions for future installments. She writes with gritty realism and often with lyrical beauty. Keller infuses her fiction with humanity — at its best, at its worst and in its everyday struggles.”
--Richmond Times-Dispatch