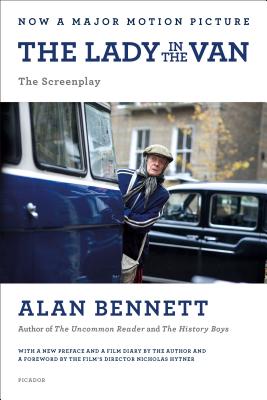 The Lady in the Van (Paperback)

The screenplay edition of the major motion picture adaptation, starring Maggie Smith, of Alan Bennett's acclaimed story "The Lady in the Van." This edition features an introduction by director Nicholas Hytner (Miss Saigon, The History Boys), and a new preface and film diary by the author.

From acclaimed author and playwright Alan Bennett, whose smash hit The History Boys won a Tony Award for Best Play, comes the screenplay of The Lady in the Van-soon to be a major motion picture starring Dame Maggie Smith.

The Lady in the Van is the true story of Bennett's experiences with an eccentric homeless woman, Miss Mary Shepherd, whom he befriended in the 1970s and allowed to temporarily park her van in front of his Camden home. She ended up staying there for fifteen years, resulting in an uncommon, often infuriating, and always highly entertaining friendship of a lifetime for the author.

Read the screenplay of the film destined to be among the most talked about of the year, and discover the unbelievable story of one of the most unlikely-yet heartwarmingly real-relationships in modern literature.

Alan Bennett has been one of England's leading dramatists since the success of Beyond the Fringe in the 1960s. His work includes the Talking Heads television series, and the stage plays Forty Years On, The Lady in the Van, A Question of Attribution, and The Madness of King George III. His recent play, The History Boys (now a major motion picture), won six Tony Awards, including best play, in 2006. In the same year his memoir, Untold Stories, was a number-one bestseller in the United Kingdom.

Praise For The Lady in the Van: The Screenplay…

“Bennett's genius is for the imploding situation in which a cleverly made house of cards shudders and comes down; the comments of his characters as they nimbly pick their way around the wreckage verge on aphorism.” —The New Yorker

“In the hands of Alan Bennett, the tragic and painful are close bedfellows with the funny and the sexual, making for a collection of stories in which we laugh at the situations presented and then feel a twinge of guilt.” —Los Angeles Times