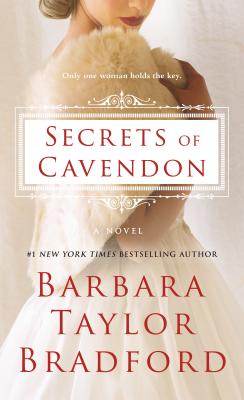 Beloved blockbuster bestselling author Barbara Taylor Bradford continues to captivate readers with her Cavendon saga. Now, with change on the horizon, what will become of the aristocratic Inghams and the devoted Swann family who serve them?

It’s 1949. Things have run smoothly at Cavendon Hall for years, with very few quarrels, dramas, or upsets between the two families. But since the end of World War II, change is inevitable. A new generation of Inghams and Swanns is at the helm, and also at the forefront of new scandal and intrigue. With romance, betrayal, heartbreak, and even murder threatening to tear them apart, the families will have to find a way to come together and protect one another, once and for all.

Told with Bradford’s inimitable deftness of prose and a beloved cast of characters, Secrets of Cavendon is a captivating novel that will draw readers in and grip them until the very last page.

“Secrets, passion and intrigue… If you’ve been suffering withdrawal symptoms from Downton Abbey, this is for you.”—Daily Mail (U.K.)

Barbara Taylor Bradford is the author of more than 25 bestselling novels, including Playing the Game, Breaking the Rules, and The Ravenscar Dynasty. She was born in Leeds, England, and from an early age, she was a voracious reader: at age 12, she had already read all of Dickens and the Brontë sisters. By the age of twenty, she was an editor and columnist on Fleet Street. She published her first novel, A Woman of Substance, in 1979, and it has become an enduring bestseller. Barbara Taylor Bradford’s books are published in over 90 countries in 40 languages, with sales figures in excess of 82 million. Ten of her novels have been adapted into television mini-series starring actors including Sir Anthony Hopkins, Liam Neeson, Deborah Kerr and Elizabeth Hurley. She has been inducted into the Writers Hall of Fame of America, and in June of 2007, Barbara was awarded an OBE (Order of the British Empire) by Queen Elizabeth II for her contributions to Literature. She lives in New York City with her husband, television producer Robert Bradford, to whom all her novels are dedicated, and their Bichon Frise dogs, who sit under her desk while she writes.
Loading...
or
Not Currently Available for Direct Purchase