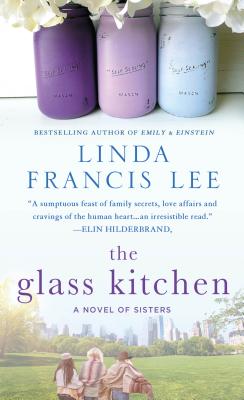 With The Glass Kitchen, Linda Francis Lee has served up a novel about sisters that is about the courage it takes to follow your heart and be yourself.

A true recipe for life.

Portia Cuthcart never intended to leave Texas. Her dream was to run the Glass Kitchen restaurant her grandmother built decades ago. But after a string of betrayals and the loss of her legacy, Portia is determined to start a new life with her sisters in Manhattan . . . and never cook again.

But when she moves into a dilapidated brownstone on the Upper West Side, she meets twelve-year-old Ariel and her widowed father Gabriel, a man with his hands full trying to raise two daughters on his own. Soon, a promise made to her sisters forces Portia back into a world of magical food and swirling emotions, where she must confront everything she has been running from. What seems so simple on the surface is anything but when long-held secrets are revealed, rivalries exposed, and the promise of new love stirs to life like chocolate mixing with cream.

The Glass Kitchen is a delicious novel, a tempestuous story of a woman washed up on the shores of Manhattan who discovers that a kitchen—like an island—can be a refuge, if only she has the courage to give in to the pull of love, the power of forgiveness, and accept the complications of what it means to be family.

LINDA FRANCIS LEE is a native Texan now living on the Upper West Side of Manhattan, steps from the Dakota Apartment Building. Linda's writing career began in college when she published her first article. But after graduating she was sidetracked from writing when she was offered a job teaching probability and statistics. Later she found her way back to her first love, and the Atlanta Journal Constitution called her breakout novel, Blue Waltz, "absolutely stunning." Now the author of more than twenty books that are published in sixteen countries around the world, when Linda isn't writing she loves to run in Central Park and spend time with her husband, family, and friends.
Loading...
or
Not Currently Available for Direct Purchase