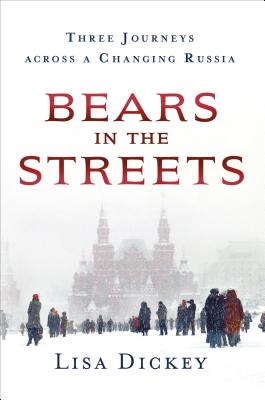 Bears in the Streets

Three Journeys across a Changing Russia

Lisa Dickey traveled across the whole of Russia three times—in 1995, 2005 and 2015—making friends in eleven different cities, then coming back again and again to see how their lives had changed. Like the acclaimed British documentary series Seven Up!, she traces the ups and downs of ordinary people’s lives, in the process painting a deeply nuanced portrait of modern Russia.

From the caretakers of a lighthouse in Vladivostok, to the Jewish community of Birobidzhan, to a farmer in Buryatia, to a group of gay friends in Novosibirsk, to a wealthy family in Chelyabinsk, to a rap star in Moscow, Dickey profiles a wide cross-section of people in one of the most fascinating, dynamic and important countries on Earth. Along the way, she explores dramatic changes in everything from technology to social norms, drinks copious amounts of vodka, and learns firsthand how the Russians really feel about Vladimir Putin.

Including powerful photographs of people and places over time, and filled with wacky travel stories, unexpected twists, and keen insights, Bears in the Streets offers an unprecedented on-the-ground view of Russia today.


Praise For Bears in the Streets: Three Journeys across a Changing Russia…

"When Lisa went to live in St. Petersburg, Russia, in 1995...she had no idea she would be drawn back again and again...Ten years later, she returned to revisit the people she had met. And in 2015 returned yet again...Dickey integrates all three visits in 12 chapters." —The New York Times Book Review

"Fascinating...[Dickey's] conversational tone, combined with insightful background and pithy observations of her subject-friends’ attitudes and lifestyles, provides a readable blend of modern comparative history and a reporter’s curiosity." —The Virginian Pilot

"A deeply intimate portrait of modern Russia that spans twenty years and whose mixture of humor, history, and emotions from a faraway land stay with you long after the book’s end." —The Huffington Post

"[Dickey's] observations are keen, and it is poignant to read how swiftly and profoundly this fascinating country has changed." —StarTribune

“[An] excellent book...Bears In the Streets is an accessible and enjoyable read, and especially relevant in a time when Russia is in the news." —Curve Magazine

“With our new president and his controversial goodwill toward Vladimir Putin, the timing of this travelogue seems prescient.” —USA Today

“An invaluable perspective on Russia’s changes over the last three decades. But it is Dickey’s easy and enjoyable style, full of insider observations and self-deprecating humor, that make this an un-put-downable read.” —Russian Life Magazine

"Delightful...Dickey’s travelogue is truly heartwarming, drawing strength from the honesty and openness of the people she visits and revisits and opening windows on the opinions of the Russian people on nearly everything, from homosexuality to Putin. Fascinating and a balm to readers enduring the current xenophobic plague." —Booklist

"Lisa Dickey has chosen an inspired way to tell a most fascinating story about the evolution of modern Russia. Bears in the Streets is brilliant, real and readable." —former U.S. Secretary of State Madeleine Albright

"A delightful travelogue...[and] a study of a culture and its values, and how people come to believe the truths they live by." —Headbutler.com

"[Dicky's] observations are keen, and it is poignant to read how swiftly and profoundly this fascinating country has changed." —Minneapolis Star Tribune

"Lisa Dickey’s sharply realized memoir is a meditation on time, friendship and the boundaries we create as well as those we cross. In thoughtful, often-hilarious, and always page-turning prose, she brings us with her across Russia over the course of twenty years. At a moment where the incurious lead political conversations, Dickey's simple act of engagement is a radical one." —Sarah Wildman, journalist and author of Paper Love: Searching for the Girl My Grandfather Left Behind

“Dickey weaves a lively, heartfelt, and engrossing account spanning a dramatic period of Russian history. Her tales from Vladivostok to St. Petersburg remind us of the human element so often obscured by geopolitics – an important contribution at a critical moment for Russia and the world.” – Ambassador William J. Burns, President, Carnegie Endowment for International Peace

"Bears in the Streets is impossible to put down. Fueled by a deep curiosity and with the skilled eye of a world class journalist, Dickey peels back superficial stereotypes and shares her discoveries and her surprises." — Rick Smolan, New York Times bestselling author and creator of the "Day in the Life" book series

Lisa Dickey is an author and ghostwriter who has helped write seventeen published nonfiction books, including eight New York Times bestsellers. Dickey began her career in St. Petersburg, Russia, writing articles for The Moscow Times and USA Today. She is an accomplished storyteller, appearing at live events such as the Moth Grand Slam.She lives in Los Angeles.
Loading...
or
Not Currently Available for Direct Purchase