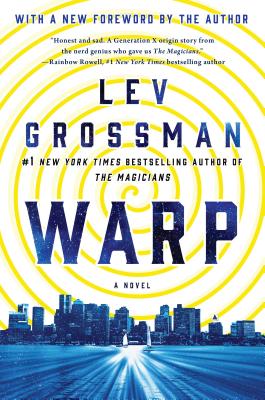 This re-publication of Lev Grossman's debut novel, Warp, shows the roots of his Magicians hero Quentin Coldwater in a book that is for anyone (and everyone) who has ever felt adrift in their own life.

Twenty-something Hollis Kessler languishes in a hopelessly magician-less world (with the exception of a fleet-footed nymph named Xanthe) not too far from where he graduated college. His friends do, too. They sleep late, read too much, drink too much, talk too much, and work and earn and do way too little. But Hollis does have an obsession: there's another world going on in his head, a world of excitement and danger and starships and romance, and it's telling him that it's time to stop dreaming and get serious.


Praise For Warp: A Novel…

"Fast-paced and tightly structured, funny and incisive, Warp is destined to become a classic." —Melanie Thernstrom, author of The Dead Girl and Halfway Heaven

"A fascinating adventure of the most unusual sort." —Gary Gygax, Creator of Dungeons and Dragons

"Reading Warp, I relived my own awful, ridiculous passage into the real world. This time around, I could laugh." —Pagan Kennedy, author of Pagan Kennedy's Living and 'Zine

Praise for the Magicians Trilogy:

“This gripping novel draws on the conventions of contemporary and classic fantasy novels in order to upend them . . . an unexpectedly moving coming-of-age story.” —The New Yorker on The Magicians

“The best urban fantasy in years.” —A.V. Club on The Magicians

“The Magicians is to Harry Potter as a shot of Irish whiskey is to a glass of weak tea. . . . Hogwarts was never like this.” —George R.R. Martin

“Sad, hilarious, beautiful, and essential to anyone who cares about modern fantasy.” —Joe Hill on The Magicians

Lev Grossman, the award-winning and #1 New York Times bestselling author of the Magicians trilogy, was born in 1969 and attended Harvard and Yale. He has been the Time Magazine book critic since 2002 and he lives in Brooklyn, New York with his family.

Lev Grossman, the award-winning and #1 New York Times bestselling author of the Magicians trilogy, was born in 1969 and attended Harvard and Yale. He has been the Time Magazine book critic since 2002 and he lives in Brooklyn, New York with his family.
Loading...
or support indie stores by buying on