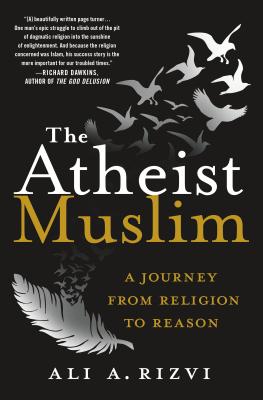 A Journey from Religion to Reason

By Ali A. Rizvi

In much of the Muslim world, religion is the central foundation upon which family, community, morality, and identity are built. The inextricable embedment of religion in Muslim culture has forced a new generation of non-believing Muslims to face the heavy costs of abandoning their parents’ religion: disowned by their families, marginalized from their communities, imprisoned, or even sentenced to death by their governments.

Struggling to reconcile the Muslim society he was living in as a scientist and physician and the religion he was being raised in, Ali A. Rizvi eventually loses his faith. Discovering that he is not alone, he moves to North America and promises to use his new freedom of speech to represent the voices that are usually quashed before reaching the mainstream media—the Atheist Muslim.

In The Atheist Muslim, we follow Rizvi as he finds himself caught between two narrative voices he cannot relate to: extreme Islam and anti-Muslim bigotry in a post-9/11 world. The Atheist Muslim recounts the journey that allows Rizvi to criticize Islam—as one should be able to criticize any set of ideas—without demonizing his entire people. Emotionally and intellectually compelling, his personal story outlines the challenges of modern Islam and the factors that could help lead it toward a substantive, progressive reformation.

ALI A. RIZVI grew up in Libya, Saudi Arabia, and Pakistan before moving to Canada and the United States when he was 24. Rizvi has been writing extensively about secularism in the Muslim world for several years, working as a regular contributor to The Huffington Post and being published on major media outlets like CNN. Rizvi is also a medical communications professional and a trained physician and oncologic pathologist.

Praise For The Atheist Muslim: A Journey from Religion to Reason…

“[Rizvi] approaches his subject with the kind of scientist’s rationality that ushered in the Age of Reason, yet he does so also with a passion for humanity that is inspiring. . . His open personality and earnestness make this book so compelling that Rizvi may well become the Dawkins or Hitchens for the millennial generation.” —New York Times Book Review

"Rizvi brings nuance to understanding the connections among religion, frustration, and violence for young Muslims....By demanding a space for questioning Islam openly that does not devolve into attacking individual Muslims, the work pushes towards the possibility of a cultural Islam that maintains family and ethnic traditions without requiring belief." —Publisher's Weekly

"Do you worry about Islam in the world today? If so, you must read The Atheist Muslim. Ironically, atheist Muslims like Ali A. Rizvi are the saving grace of Islam. Atheist Muslims, like Ali, give us hope for a pathway in which we, as Muslim reformers, can save Islam from the Muslims burying the religion in a heap of medieval, sexist and intolerant interpretations. The Atheist Muslim offers all of us a vitally important road map for critical thinking about Islam—and, yes, hope.” —Asra Q. Nomani, cofounder of the Muslim Reform Movement and author of Standing Alone: An American Woman’s Struggle for the Soul of Islam

"Ali Rizvi’s Atheist Muslim is an intelligent, heartfelt, and honest examination of a pressing issue in the world today. A humanistic, ecumenical, and secularized version of Islam will be among the most important movements of the 21st century, and Rizvi’s book is an invaluable guide to the challenges and opportunities in advancing it." —Steven Pinker, Johnstone Professor of Psychology, Harvard University, and author of The Better Angels of Our Nature.

"One man’s epic struggle to climb out of the pit of dogmatic religion into the sunshine of enlightenment. And because the religion concerned was Islam, his success story is the more important for our troubled times. In this beautifully written page turner, Ali Rizvi shows us what it is personally like to be trapped in Islam, and we admire him the more for the courage of his escape." —Richard Dawkins, author of The God Delusion

"Ali's message is one which any of us who want true understanding and coexistence should hear. Separating belief from tradition is the key to us respecting other people and cultures while not ignoring our intellect to do so." —Dave Rubin, Host of The Rubin Report

"I have heard it said by my fellow liberals and Muslim co-religionists that atheists have no role in the debate around Islam's future. They have left God's tribe, so why should anyone listen to what they have to say. This is nothing but a form of bigotry and victim-blaming disguised as multiculturalism and 'respect'. The day we Muslims leave ex-Muslims alone, and the day over twenty Muslim-majority countries around the world decriminalise apostasy and blasphemy, is the day we can expect them to leave Islam alone. Let there be no doubt: overwhelmingly, we Muslims are their oppressors. They - the minority within the minority - are our victims. Ali A. Rizvi's book The Atheist Muslim is a timely and much needed contribution to the ongoing debate around contemporary Islam's struggle to come to terms with modern liberalism, secularism, and freedom of as well as from religion." —Maajid Nawaz, author of Radical

“Ali A. Rizvi has written a book which is a much-need discourse for the Muslim world today as Muslims struggle globally with issues of radicalization and modernity. Rizvi has documented his personal journey with reason and logic, offering empathy for those following a different path. His book is less about atheism and more about the issues facing Muslims and the urgent need for critical thinking and reflection. Rizvi’s honesty and integrity has to be appreciated as he does not indulge in political correctness. As a believer I recommend this book be read at least once.” —Raheel Raza, President of The Council for Muslims Facing Tomorrow and author of Their Jihad…Not my Jihad!

“In this timely and important book, Ali Rizvi deftly weaves together two narratives: the abandonment of his Muslim faith, and a critique of those doctrines of Islam that create terrorism and oppression. It turns out that these are connected, for the very reasons Rizvi became an apostate are the reasons why it’s no longer possible to see Islam as a “religion of peace.” ––Jerry Coyne, Professor Emeritus, University of Chicago, author of Faith Versus Fact and the New York Times bestseller Why Evolution is True

"Ali A. Rizvi has long been a rare voice of reason and moral clarity on the topic of Islam. Finally, he has written a book—and it was worth the wait. One of the greatest challenges of our time is to inspire a secular Enlightenment throughout the Muslim community. But the obscurantism practiced by so many 'moderate' Muslims, along with the hypocrisy of their liberal apologists, has made this project immensely more difficult. If you want to understand why so many free, educated people continue to lie supine before the threat of Islamist theocracy, read The Atheist Muslim." —Sam Harris, author of the New York Times bestsellers The End of Faith, The Moral Landscape, and Waking Up.