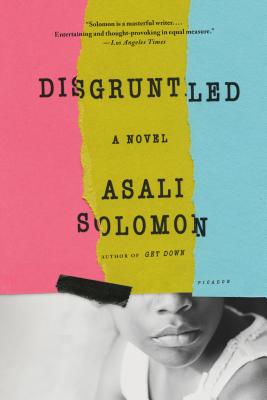 A Denver Post Best Fiction Book of the Year

An elegant, vibrant, startling coming-of-age novel for anyone who has ever felt the shame of being alive

Kenya Curtis is only eight years old, but she knows that she's different, even if she can't put her finger on how or why. It's not because she's black - most of the other students in the fourth-grade class at her West Philadelphia elementary school are, too. Maybe it's because she celebrates Kwanzaa, or because she's forbidden from reciting the Pledge of Allegiance. Maybe it's because she call her father -a housepainter-slash-philosopher - "Baba" instead of "Daddy," or because her parents' friends gather to pour out libations "from the Creator, for the martyrs" and discuss "the community."

Disgruntled, effortlessly funny and achingly poignant, follows Kenya from West Philadelphia to the suburbs, from public school to private, and from childhood through adolescence, as she grows increasingly disgruntled by her inability to find any place or thing or person that feels like home.

A coming-of-age tale, a portrait of Philadelphia in the late eighties and early nineties, and an examination of the impossible double-binds of race, Disgruntled by Asali Solomon is a novel about the desire to rise above the limitations of the narratives we're given and the painful struggle to craft fresh ones we can call our own.


Praise For Disgruntled: A Novel…

“In this witty take on 1980s Philadelphia, a young girl comes of age and learns to navigate love, loss, school and family. Kenya, whom we meet at age 7 and watch graduate from high school into womanhood, is the daughter of Afrocentric parents. Their politics and yearly celebration of Kwanzaa, which entails ‘sporting an orange, yellow and brown dashiki and a forehead-straining vertical braided hairstyle,' make Kenya a social pariah even at her all-black school. In Kenya, Solomon has crafted a character of irrepressible verve and voice who carries us joyously through the novel—even after she witnesses her parents' breakup, when her father is imprisoned for injuring her mother with a gun. With the separation, Kenya is propelled from her safe black Philly world into the white world of an elite private school—the very world her father fled, traumatized and bitter. Here, she becomes a master of code-switching to fit in, all while knowing that her classmates will never truly accept her. After a chance meeting with a black boy from her old neighborhood turns into a failed love affair, Kenya seeks comfort in a visit to her father, newly released from prison. The scenes with Kenya's father, who's enjoying a bigamous life with two new wives and two new sets of kids, are razor-sharp on the contradictions of identity—here, for example, we see Kenya's father, a staunch activist for African-American rights unable to make the link to respect women's rights. Kenya has a palpable need for her father to become a solid, guiding force as she steps into womanhood, but he can't do it. And when her stepfather loses all her mother's money, Kenya's future college education doesn't quite go as planned. In this debut novel, Solomon (Get Down, 2008) examines the confusing moments on the verge of adulthood within the ever shifting makeup of family and society. Blackness, feminism and the loss of virginity have never been analyzed by a more astute and witty main character.” —Kirkus Reviews

“One of my favorite story collections. Asali Solomon's Get Down is a book that understands the degree to which race and racial identity are so often about performance . . . Race is one thematic link of the collection, and it is given its due complexity. But the thread that ultimately ties these stories together, and these characters to readers, is the raw desire for genuine human connection in the face of everything—race included--that seems determined to sabotage it.” —Danielle Evans, NPR on Get Down

“Fresh, intimate portraits of people trying to straddle contradictory worlds. While Asali Solomon writes with uncanny acumen about men, Get Down will resonate with anyone—male or female, black or white, young or old—who has ever felt like an outsider.” —Jennifer Egan, author of A Visit from the Goon Squad on Get Down

Asali Solomon's first novel, Disgruntled, was a best book of the year at the San Francisco Chronicle and Denver Post. Her first book, Get Down, earned a Rona Jaffe Foundation Writers’ Award, a National Book Foundation’s “5 Under 35” honor, and was a finalist for the Hurston-Wright Legacy Award. Her work has appeared in O Magazine, Vibe, Essence, on NPR, the Paris Review Daily, McSweeney’s and several anthologies. Associate Professor, Chair of English, and Director of Creative Writing, Solomon teaches fiction writing and literature of the African Diaspora at Haverford College. Born and raised in Philadelphia, she lives there with her husband and two sons.