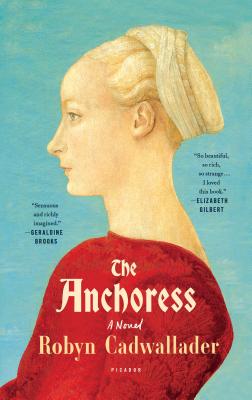 England, 1255: Sarah is only seventeen when she chooses to become an anchoress, a holy woman shut away in a small cell, measuring seven by nine paces, at the side of the village church. Fleeing the grief of losing a much-loved sister as well as the pressure to marry, she decides to renounce the world—with all its dangers, desires, and temptations—and commit herself to a life of prayer. But when she starts hearing the voice of the previous anchoress whispering to her, seemingly from the stones themselves, it soon becomes clear that even the thick, unforgiving walls of Sarah’s cell cannot protect her as well as she had thought.

An absorbing story of faith, desire, shame, fear, and the human need for connection, The Anchoress by Robyn Cadwallader is a haunting and compelling novel: both quietly heartbreaking and thrillingly unpredictable.


Praise For The Anchoress: A Novel…

“Cadwallader’s writing evokes a heightened attention to the senses: you might never read a novel so sensuous yet unconcerned with romantic love. For this alone, it is worth seeking out. But also because The Anchoress achieves what every historical novel attempts: reimagining the past while opening a new window—like a squint, perhaps—to our present lives.” —Eleanor Limprecht, The Sydney Morning Herald

“A truly fine and deeply moving novel, one to save and read again.” —Hudson Valley News

“Cadwallader’s vivid period descriptions set a stunning backdrop for this beautiful first novel as Sarah rejects a larger world that will not allow her to live on her own terms and goes about creating a smaller one that will. Sarah’s path will intrigue readers at the crossroads of historical fiction, spirituality, and even feminism as she faces the internal and external pressures on women of the Middle Ages.” —Booklist (starred review)

“A considerable achievement for a debut novel.” —The New York Times Book Review

“An ambitious debut . . . Robyn Cadwallader plays gracefully with medieval ideas about gender, power and writing: if the Bible is the written word of God, who may read it? What might women learn from their exclusion? The classic early-modern poetic comparisons between the room, the womb and tomb are lightly carried and masterfully used at what is probably the gentle climax of the story.” —The Guardian (London)

Robyn Cadwallader has published numerous prizewinning short stories and reviews, as well as a book of poetry and a nonfiction book based on her PhD thesis concerning attitudes toward virginity and women in the Middle Ages. She lives among vineyards outside Canberra, Australia, when not traveling to England for research and visiting ancient archaeological sites along the way. The Anchoress is her first novel.
or support indie stores by buying on