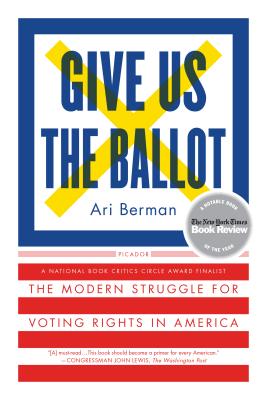 Give Us the Ballot

The Modern Struggle for Voting Rights in America

Named a Best Book of the Year by
NPR, The Boston Globe, and Kirkus Reviews (Best Nonfiction)

Countless books have been written about the civil rights movement, but far less attention has been paid to what happened after the dramatic passage of the Voting Rights Act in 1965 and the turbulent forces it unleashed. In this groundbreaking narrative history, Ari Berman charts both the transformation of American democracy under the VRA and the counterrevolution that has sought to limit it from the moment the act was signed into law. The VRA is widely regarded as the crowning achievement of the civil rights movement, and yet—more than fifty years later—the battles over race, representation, and political power continue, as lawmakers devise new strategies to keep minorities out of the voting booth, while the Supreme Court has declared a key part of the Voting Rights Act unconstitutional.

Through meticulous research, in-depth interviews, and incisive on-the-ground reporting, Give Us the Ballot offers the first comprehensive history of its kind, and provides new insight into one of the most vital political and civil rights issues of our time.


Praise For Give Us the Ballot: The Modern Struggle for Voting Rights in America…

“An engrossing narrative history . . . Berman vividly shows that the power to define the scope of voting rights in America has shifted from Congress to the courts.” —Jeffrey Rosen, The New York Times Book Review (Editor's Choice)

“[Give Us The Ballot] should become a primer for every American, but especially for congressional lawmakers and staffers, because it so capably describes the intricate interplay between grass-roots activism and the halls of Congress . . . Congress must fix the Voting Rights Act, and Berman’s book explains why, without passion or favoritism. It is the first history of the contemporary voting rights movement in the United States. It is long overdue, but Berman’s extensive reporting makes it well worth the wait.” —John Lewis, The Washington Post

“Ari Berman’s important recent book, Give Us the Ballot, explores the struggle over voting rights unleashed by the civil-rights revolution, and how it continues to this day . . . Berman has performed a valuable public service by illuminating this history.” —Eric Foner, The Nation

“Fifty years after passage of the Voting Rights Act, Give Us the Ballot makes a powerful case that voting rights are under assault in 21st century America. Current events underscore the book's timeliness.” —Wendy Smith, The Los Angeles Times

“Ari Berman’s Give Us the Ballot, a history of the 1965 Voting Rights Act, makes for an excellent extended example of the mechanisms by which race in the South becomes race in the nation.” —Nicholas Lemann, The New Yorker

“An urgent, moving, deeply important history of the modern right to vote in the United States” —Michael O'Donnell, The Christian Science Monitor

“Comprehensive . . . The value of Give Us the Ballot lies in illustrating that the [Voting Rights Act] has never been universally accepted . . . Ari Berman convincingly shows that the fight for voting rights is far from over.” —Jordan Michael Smith, The Boston Globe

“An extremely valuable and terribly timely history of the Voting Rights Act . . . Berman deftly weaves together the politics, the intellectual and legal arguments, the legislative battles, the counterrevolutionary schemes, and the tragic and ironic turns in the story.” —Harvey J. Kaye, The Daily Beast

“Illuminating . . . Give Us the Ballot is a smart compendium of election "reforms." Berman removes the facade of intellectual honesty--where voting-rights opponents even bothered to make an argument--and lays bare the many, many ways to game the outcome of an election.” —Scott Porch, The Chicago Tribune

“The voting rights struggle of the 1960s produced several moments that remain seared in the nation’s memory . . . Ari Berman tells the story of these stirring moments, and tells it well. But unlike many civil rights chronicles, his account begins rather than ends in the 1960s. Via a series of vivid anecdotes, he describes the tumultuous history of the Voting Rights Act (VRA) from its enactment all the way to the present day. It’s an important and absorbing tale.”
—Nicholas Stephanopoulos, The New Rambler

“Just in time for the 50th anniversary of the Voting Rights Act comes this deep dive into the legacy of the civil rights movement and why we're still fighting for the right for everyone to have a slice of the political power pie.” —Lara Zarum, The Village Voice

“The Voting Rights Act was signed into law 50 years ago, but according to journalist Berman, the fight for equality in voting is still taking place” —The Los Angeles Times

“Ari Berman's Give Us the Ballot explains that the VRA's 50 years have seen great gains but also consistent opposition. The specifics may have changed. The campaign to suppress turnout among minorities has not . . . Read Give Us the Ballot.” —Richmond Times-Dispatch

“Ari Berman's Give Us the Ballot is a fascinating, if also infuriating, chronicle of the modern era in voting rights - a time when those hard-won rights are suddenly in great jeopardy. Comprehensive, fair-minded and wise, the book tells a haunting story of rights won and rights lost.” —Jeffrey Toobin, author of The Oath and The Nine

“Ari Berman's Give us the Ballot is a must read for anyone who cares about the health of American democracy. Written with a deep respect for history, a keen journalistic sensibility, and a visceral passion for fairness, Berman's book takes us on a swift and critical journey through the last fifty years of voting in America. He begins on the Edmund Pettus bridge with the foot soldiers of Selma and concludes in the rotunda of the North Carolina statehouse with the protestors of Moral Mondays. All the critical figures of American voting rights appear in this book, but Berman allows no one story to dominate the narrative. His book is about the people, the ballot box, and our as yet unrealized ideal of fully free and fair elections. We have not yet arrived at the healthy democracy the 1965 Voting Rights Act promises is possible, but we have not given up hope. The struggle continues.” —Melissa Harris-Perry, host of MSNBC's Melissa-Harris Perry Show and Presidential Professor of Politics and International Studies at Wake Forest University

“Expertly taking us from the bloody streets of Selma to the current counterrevolution against the voting rights of black and poor Americans, Ari Berman reminds us that democracy can never be taken for granted, especially at a time when the courts are more than willing to abet efforts to limit the right to vote.” —Eric Foner, author of Gateway to Freedom

“Ari Berman has written a powerful history of the massive struggle that has taken place since 1965 over the survival of the Voting Rights Act. Berman reveals that from the moment Congress passed the landmark bill, opponents mobilized to dismantle it. The ongoing and sustained assaults on this historic legislation finally started to find success during the 1980s when opponents directed their efforts to the courts. This is a terrific, though troubling, read about the future of American democracy.” —Julian E. Zelizer, author of The Fierce Urgency of Now: Lyndon Johnson, Congress, and the Battle for the Great Society

“Berman does a superb job of making the history of the right to vote in America not only easily understandable, but riveting...This is the best kind of popular history-literate, passionate, and persuasive, balancing detail with accessibility.” —Publishers Weekly, starred review

“[I]ncisive... This emotional book runs the gamut... Not just a compelling history, but a cry for help in the recurring struggle to gain what is supposed to be an inalienable right.” —Kirkus, starred review

Ari Berman is a political correspondent for The Nation and an investigative journalism Fellow at the Nation Institute. His writing has also appeared in The New York Times and Rolling Stone, and he is a frequent commentator on MSNBC and NPR. His first book, Herding Donkeys: The Fight to Rebuild the Democratic Party and Reshape American Politics, was published in 2010. He lives in New York City.