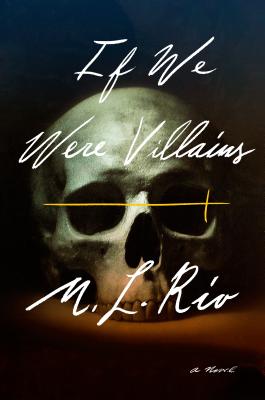 If We Were Villains

On the day Oliver Marks is released from jail, the man who put him there is waiting at the door. Detective Colborne wants to know the truth, and after ten years, Oliver is finally ready to tell it.

A decade ago: Oliver is one of seven young Shakespearean actors at Dellecher Classical Conservatory, a place of keen ambition and fierce competition. In this secluded world of firelight and leather-bound books, Oliver and his friends play the same roles onstage and off: hero, villain, tyrant, temptress, ingénue, extras.

But in their fourth and final year, good-natured rivalries turn ugly, and on opening night real violence invades the students’ world of make-believe. In the morning, the fourth-years find themselves facing their very own tragedy, and their greatest acting challenge yet: convincing the police, each other, and themselves that they are innocent.

If We Were Villains was named one of Bustle's Best Thriller Novels of the Year, and Mystery Scene says, "A well-written and gripping ode to the stage...A fascinating, unorthodox take on rivalry, friendship, and truth."


Praise For If We Were Villains: A Novel…

"Pulls the reader in from the first page...A well-written and gripping ode to the stage...A fascinating, unorthodox take on rivalry, friendship, and truth, IF WE WERE VILLAINS will draw readers in and leave them pondering the weight of our biggest actions and their consequences."
—Mystery Scene

"Echoing such college-set novels as Donna Tartt’s The Secret History and mixing in enough Shakespearean theater to qualify readers for the stage, Rio’s debut mystery is an engrossing ride…Rio crafts an intricate story about friendship, love, and betrayal. Recommended for readers who enjoy literary fiction by authors such as Tartt or Emily St. John Mandel.”
—Library Journal, starred review

“Bloody, melodramatic, suspenseful debut… This novel about obsession at the conservatory will thoroughly obsess you.”
—Kirkus, starred review

"This is a rare and extraordinary novel: a vivid rendering of the closed world of a conservatory education, a tender and harrowing exploration of friendship, and a genuinely breathtaking literary thriller. I can’t recommend this book highly enough, and can’t wait to read what M. L. Rio writes next."
—Emily St. John Mandel, New York Times bestselling author of Station Eleven

“Much like Donna Tartt’s The Secret History, M. L. Rio’s sparkling debut is a richly layered story of love, friendship, and obsession. Both comic and tragic, this novel asks what people are willing to sacrifice in the name of ambition. Expertly plotted, beautifully written, If We Were Villains will keep you riveted through its final, electrifying moments.”
—Cynthia D’Aprix Sweeney, New York Times bestselling author of The Nest

“If We Were Villains is a whip-smart, chilling tale of a group of Shakespeare students who are, as the Bard put it, "a little more than kin, and less than kind" — especially after one of their own meets a horrific fate. Full of friendship, betrayal, and passionate devotion, this is a page-turning literary thriller whose final, shocking twist you won't soon forget.”
—Miranda Beverly-Whittemore, New York Times bestselling author of Bittersweet and June

“A tale worthy of the Bard himself…ending in one final, astonishing twist. Recommended for readers with refined literary tastes, and those looking for ‘something like’ Donna Tartt.”
—Booklist

M. L. Rio has worked in bookstores and theatres for years, and is currently pursuing her MA in Shakespeare Studies at King’s College London. If We Were Villains is her debut novel.
Loading...
or support indie stores by buying on