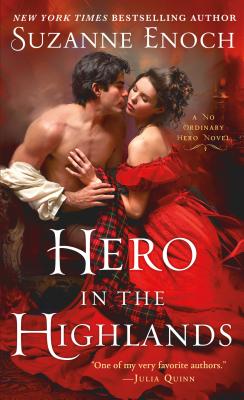 Hero in the Highlands

A No Ordinary Hero Novel

WILD AT HEART
Scotland, 1812: He’s ferocious and rugged to the bone, an English soldier more at home on the battlefield than in any Society drawing room. And when Major Gabriel Forrester learns that he’s inherited the massive Scottish Highlands title and estate of a distant relation, the last thing he wants to do is give up the intensity of the battlefield for the too-soft indulgences of noble life. But Gabriel Forrester does not shirk his responsibilities, and when he meets striking, raven-eyed lass Fiona Blackstock, his new circumstances abruptly become more intriguing.
Like any good Highlander, Fiona despises the English—and the new Duke of Lattimer is no exception. Firstly, he is far too attractive for Fiona’s peace of mind. Secondly, his right to “her” castle is a travesty, since it’s been clan Maxwell property for ages. As the two enter a heated battle of wills, an unexpected passion blazes into a love as fierce as the Highlands themselves. Is Fiona strong enough to resist her enemy’s advances—or is Gabriel actually her hero in disguise?


Praise For Hero in the Highlands: A No Ordinary Hero Novel…

"The latest from the ever-popular Enoch is steamy and bubbling with humor, a scrumptious tale to begin her No Ordinary Hero series." - Booklist Starred Review on Hero in the Highlands

"A thrilling and sexy story." - Kirkus Starred Review on Hero in the Highlands

"A romance not to be missed." - BookPage on Hero in the Highlands

"One of my very favorite authors." —Julia Quinn

Suzanne Enoch grew up in Southern California, where she still balances her love for the Regency romances of Georgette Heyer and classic romantic comedies with her obsession for anything Star Wars. Given her love of food and comfy chairs, she may in fact be a Hobbit. She has written more than 35 romance novels, including traditional Regencies, Historical Romance, and contemporary Romantic Suspense. When she isn't working on her next book she is trying to learn to cook, and wishes she had an English accent. She is the bestselling author of The Scandalous Brides series, The Scandalous Highlanders series, and One Hot Scot.
Loading...
or
Not Currently Available for Direct Purchase