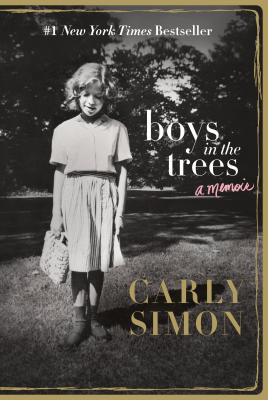 Boys in the Trees

“Boys in the Trees is a surprising and delightful read and more than a guilty pleasure derived from a crass and exploitative celebrity culture. Carly Simon has always been an appealing and alluring personality, and her memoir presents an honest -- yet crafty -- look at her life, beautifully and elegantly voiced. At times captivating, touching, and occasionally embarrassing, it is unfailingly entertaining -- a sexy and romantic book with a sweet heart and soul.”
— Ed Conklin (E), Chaucer's Books, Santa Barbara, CA
View the List

A People Magazine Top Ten Book of the Year!

"One of the best celebrity memoirs of the year." -The Hollywood Reporter

Simon's memoir reveals her remarkable life, beginning with her storied childhood as the third daughter of Richard L. Simon, the co-founder of publishing giant Simon & Schuster, her musical debut as half of The Simon Sisters performing folk songs with her sister Lucy in Greenwich Village, to a meteoric solo career that would result in 13 top 40 hits, including the #1 song "You're So Vain." She was the first artist in history to win a Grammy Award, an Academy Award and a Golden Globe Award, for her song "Let the River Run" from the movie Working Girl.

The memoir recalls a childhood enriched by music and culture, but also one shrouded in secrets that would eventually tear her family apart. Simon brilliantly captures moments of creative inspiration, the sparks of songs, and the stories behind writing "Anticipation" and "We Have No Secrets" among many others. Romantic entanglements with some of the most famous men of the day fueled her confessional lyrics, as well as the unraveling of her storybook marriage to James Taylor.


Praise For Boys in the Trees: A Memoir…

"One of the best celebrity memoirs of the year ... elegantly written and revealing." - The Hollywood Reporter

"Carly Simon could have gotten away with just the name-dropping. In her life, she's crossed paths with an astonishing range of famous people, from Cat Stevens and Jimi Hendrix to Benny Goodman and Albert Einstein. So it's a pleasant surprise that in her compelling new autobiography, Boys in the Trees, she lays out her naked emotions and insecurities, and that she proves to be a supple writer with a gift for descriptions."- Rolling Stone

"A lyrical look back at her childhood, her career, and oh, the men in her life...anecdote-filled...dishy without being salacious. There’s plenty here for fans to feast upon" - USA Today
“Boys in the Trees meets its lofty expectations. As one of pop music’s more literate songwriters — she was the first solo woman to win a Best Song Oscar for Let the River Run from Working Girl — Simon writes beautifully and affectingly. Her publisher father, for whom she clamored for attention and validation, would be proud.” – Miami Herald