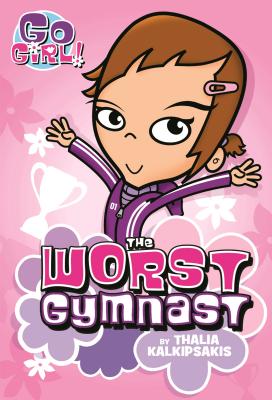 DREAM BIG! Gemma loves gymnastics, and she might actually have a chance at competing at the Olympic level one day.

But she's just had the worst class EVER, and her coach isn't happy. She messed up big time, but she has an idea for how to win back her coach's favor. . . if she can pull it off. Is Gemma's life as a gymnast over? Or will her clever plan keep her on the team?

Go Girl #5: The Worst Gymnast by Thalia Kalkipsakis and illustrated by Ash Oswald is a sweet story full of familiar themes that young readers will be able to relate to their own lives.

"Simple in language and story structure, making them accessible to young readers who are making their first foray into chapter books and good choices for reluctant readers." - School Library Journal, on the Go Girl! Series

Thalia Kalkipsakis is the author of several books in the Go Girl! series, including The Worst Gymnast, Sister Spirit, Dancing Queen and Basketball Blues. She has also written a nonfiction book, It’s True! Sleep Makes You Smarter! Her books have been translated in many languages and sold around the world. Kalkipsakis grew up on a farm on the outskirts of Melbourne, Australia, and used to escape into the bush to explore. Her biggest passion has always been writing, but she has also been a dancer and edited websites and travel guides. She now lives in north-eastern Victoria with her husband and two children and a black cat named Bindi.
Loading...
or
Not Currently Available for Direct Purchase