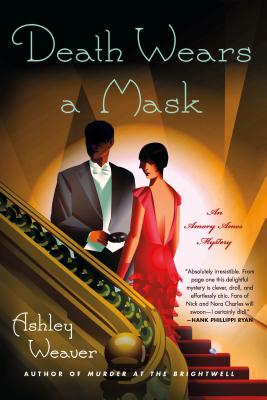 “Amory Ames and her rakish husband Milo might just be the new Nick and Nora Charles.” —Deborah Crombie

It was amazing, really, what murder had done for my marriage . . .

Following the murderous events at the Brightwell Hotel, Amory Ames is looking forward to a tranquil period of reconnecting with her reformed playboy husband, Milo. She hopes a quiet stay at their London flat will help mend their relationship. However, Amory soon finds herself drawn into another investigation when an old friend of her mother’s asks her to look into the disappearance of valuable jewelry snatched at a dinner party.

Amory agrees to help lay a trap to catch the culprit at a lavish masked ball. But when one of the illustrious party guests is murdered, she is pulled back into the world of detection, caught up in both a mystery and a set of romantic entanglements where nothing is as it seems.

Also out now in the Amory Ames mysteries: Murder at the Brightwell and A Most Novel Revenge

Praise For Death Wears a Mask: An Amory Ames Mystery…

“Absolutely irresistible. From page one this delightful mystery is clever, droll, and effortlessly chic. Fans of Nick and Nora Charles will swoon—I certainly did!” —Hank Phillippi Ryan

“Ashley Weaver takes Golden Age–mystery elements and makes them her own with charm and wit.” —Fresh Fiction

“Weaver has followed up her debut novel with another engaging closed-house mystery sure to appeal to Agatha Christie devotees.” —Booklist