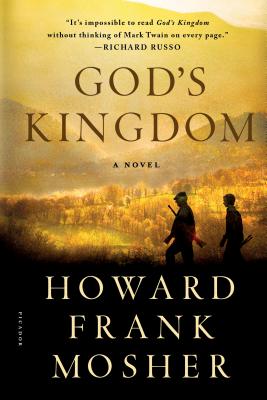 “If the past is a foreign country, we certainly have an expert native guide in Mosher who recreates perfectly, right down to the smoky fire smoldering in the town dump, the small town of Kingdom Common, Vermont, in the 1950s. Here fans of previous books are reintroduced to Jim Kinneson, now entering high school. For first-time readers, the ubiquitous, multi-generational Kinneson clan of the Northern Kingdom will be immediately accessible through the talent of master storyteller Mosher in this latest variation on the themes of tradition, the burden of family history, small-town secrets, and the stark beauty of the wilds of Northern Vermont.”
— Darwin Ellis (W), Books On The Common, Ridgefield, CT
View the List

Howard Frank Mosher is one of America's most acclaimed writers. His fiction, set in the world of Vermont's Northeast Kingdom, chronicles the intertwining family histories of the natives, wanderers, outcasts, and fugitives--white, Native American, escaped slaves fleeing north, French Canadians, and others--who settled in this remote and beautiful place.
God's Kingdom explores the Kinneson family through the coming of age of the heir, Jim, and its rich and complicated history. Earnest and innocent, a bright high school student, Jim grows curious about the unspoken "trouble in the family" that haunts his father, a small-town newspaper editor, and his grandfather, a raconteur who keeps the Kinnesons' secrets to himself. Layer by layer, tale by tale, sorting out fact from deliberately obscured legend, Jim explores the Kinnesons' long relationship with others in the Kingdom, culminating in a discovery that forever changes his life and place in that world. Beginning with a magical Thanksgiving Day hunting trip in the autumn mountains, and ending with Jim on the brink of leaving home to find life-and perhaps love-on the other side of the ridge, God's Kingdom unfolds with the patient delight of a master storyteller.


Praise For God's Kingdom: A Novel…

“This is American fiction at its very best, a rip-roaring story full of hilarity and heartbreak. I finished it feeling better about myself and life in general. God's Kingdom is the good stuff, the very best stuff, honest and emotionally resonant. Don't miss it.” —Stephen King

“Over the years Mosher's beloved Vermont "Kingdom" has become one of America's most magical literary places.” —Richard Russo

“He is the rarest thing in literature: an original. Vermont is Mr. Mosher's literary kingdom and he rules it with a bittersweet pen pressed hard to the page.” —Howard Norman, author of Next Life Might Be Kinder

“Few writers plumb the cords that link fathers and sons with the hope – and humor – of Howard Frank Mosher. He is wistful and wise, and his moral compass is as precise as his immense skills as a storyteller. I cherish my visits to the mythical Kingdom County that once upon a time was Vermont.” —Chris Bohjalian, author of The Sandcastle Girls and Close Your Eyes, Hold Hands

“Ripe with realism, characters are shaped by a land of isolated beauty... a welcome dose of nostalgic realism laced with hard-edged wisdom.” —Kirkus

Howard Frank Mosher (1942-2017) is the author of more than a dozen books of fiction and nonfiction, including Northern Borders and Disappearances, both made into major motion pictures. Mosher received Guggenheim and National Endowment for the Arts fellowships, the American Academy of Arts and Letters Literature Award, the New England Book Award, and the 2011 New England Independent Booksellers Association's President's Award for Lifetime Achievement in the Arts. Born in the Catskill Mountains, Mosher lived in Vermont's fabled Northeast Kingdom, "God's Kingdom," for all of his adult life.
Loading...
or support indie stores by buying on
(This book is on backorder)