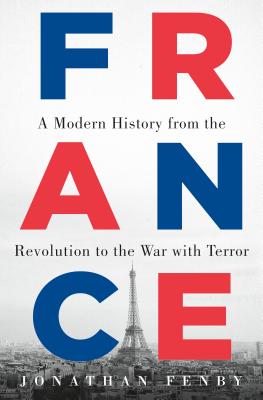 A Modern History from the Revolution to the War with Terror

With the defeat of Napoleon Bonaparte at the Battle of Waterloo in June 1815, the next two centuries for France would be tumultuous. Critically acclaimed historian and political commentator Jonathan Fenby provides an expert and riveting journey through this period as he recounts and analyzes the extraordinary sequence of events of this period from the end of the First Revolution through two others, a return of Empire, three catastrophic wars with Germany, periods of stability and hope interspersed with years of uncertainty and high tensions.

As her cross-channel neighbor Great Britain would equally suffer, France was to undergo the wrenching loss of colonies in the post-Second World War era as the new modern world we know today took shape. Her attempts to become the leader of the European union was a constant struggle, as was her lack of support for America in the two Gulf Wars of the past twenty years. Alongside this came huge social changes and cultural landmarks, but also fundamental questioning of what this nation, which considers itself exceptional, really stood—and stands—for. That saga and those questions permeate the France of today, now with an implacable enemy to face in the form of Islamic extremism which so bloodily announced itself this year in Paris. Fenby will detail every event, every struggle, and every outcome across this expanse of 200 years. It will prove to be the definitive guide to understanding France.

JONATHAN FENBY is a former editor of the UK Observer and of the South China Morning Post. He is the author of several books including the acclaimedThe General: Charles de Gaulle and the France He Saved and Chiang Kai-shek: China's Generalissimo and the Nation He Lost. In 2013 Jonathan was awarded the Chevalier of the Legion d'Honneur by the French government for his contribution towards understanding between Britain and France.

Praise For France: A Modern History from the Revolution to the War with Terror…

“Quelle histoire!... A good feel for political atmosphere... This book is a feast of tidbits about French history… The writing is consistently ‘lively’ in this way, the presentation jazzed up with sidebars sand timelines.” - New York Times Book Review

"For all the confusion, twisting and turning of politics, student revolts, and peasant uprisings, France has survived, and Fenby dutifully guides us through. A capable history sure to appeal to all lovers of France." - Kirkus Reviews

“general readers will find excellent value in this effort to understand this influential nation.” - Booklist

"I recommend this history to those who appreciate the playful ironies of French culture. Historical novelists will find a rich vein of information not only within its detailed discussion of revolution and republics, but also in its notes and bibliography." - Historical Novels Review