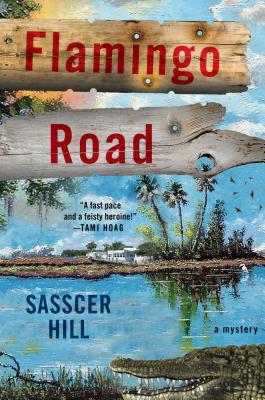 A Mystery (A Fia McKee Mystery #1)

Baltimore police officer Fia McKee is put on leave for excessive use of force after interfering in a crime that turns deadly. Given a second chance, she is sent to work undercover for the Thoroughbred Racing Protective Bureau (TRPB) at the Gulfstream Park in Florida, where she works as an exercise rider. Her assignment is to watch and report back on two racetrack workers who have been suspected of illegal activities and whose horses continue to outperform all expectations, winning their owners unseemly amounts of money in the races.

To complete her cover story, Fia moves in with her semi-estranged brother, Patrick, who lives near the racetrack. Her investigations are complicated when her niece, Jilly, disappears after a shadow gang takes Jilly’s beloved horse. Now Fia must work two angles—first to find out what’s really going on with the men who might or might not be gaming the system, and second to bring the men who prey on horses to justice. Along the way, Fia encounters Cuban gangs living off the grid, a (very handsome) do-gooder who’s close on their trail, and a cabal of super wealthy gamblers who will stop at nothing to ensure they always win.


Praise For Flamingo Road: A Mystery (A Fia McKee Mystery #1)…

“A fast pace and a feisty heroine put Flamingo Road in the winner's circle. Sasscer Hill is off to the races with her new character, Fia McKee, and I'm on board for that ride!” —Tami Hoag

“Fast paced, suspenseful, and cleverly plotted—insider Sasscer Hill nails the high stakes world of horse racing. Her fierce and determined investigator Fia McKee will speed you to the finish line and leave you breathless. A winner!” —Hank Phillippi Ryan

“Hill takes her readers on the ride of their lives as high-stakes crime collides with the adrenaline-fueled world of professional horse racing in Flamingo Road—a surefire winner, rich in authentic detail and heart-stopping suspense.” —Andrew Grant

“Fans of Kinsey Millhone and V. I. Warshawski, there’s a new sheriff in town. Her name’s Fia McKee and she’s as smart, tough, impetuous, cynical, caring, infuriating, likeable, sassy, sexy, temperamental, and courageous as those illustrious predecessors. As for Sasscer Hill—the woman can flat-out write. She proves it with Flamingo Road, an intelligent and thrilling first book in what promises to be a great series.” —David Housewright

“In her new thriller, Sasscer Hill ups the ante on her horses. Could she be the Dick Francis of her generation? Count me among those who would vote yes.” —Margaret Maron

“Paced like a roller coaster ride, Flamingo Road is rich with authentic South Florida setting and racetrack detail as it races through a story of betrayal, family loyalty, illicit drugs, and a set of thugs that will keep you reading late into the night.” —Mark Pryor

SASSCER HILL was an amateur steeplechase jockey, as well as a horse owner who bred, raised, and rode race horses for thirty years in Maryland. Her first published novel, Full Mortality, was nominated for both the Agatha and Macavity Best First Mystery Awards. Born in Washington, D.C., Hill earned a BA in English Literature from Franklin and Marshall College. She now lives with her husband, dog, and cat, in Aiken, SC., where she still enjoys horseback riding.
Loading...
or
Not Currently Available for Direct Purchase