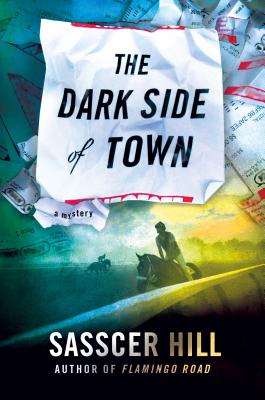 The Dark Side of Town

A Mystery (A Fia McKee Mystery #2)

Undercover agent Fia McKee returns in The Dark Side of Town, another thrilling mystery by Sasscer Hill and set in the seamy underbelly of horse racing.

Fia McKee, now officially employed by the Thoroughbred Racing Protective Bureau (TPRB), is sent undercover to Saratoga Racetrack to investigate Mars Pizutti, a racehorse trainer whose horses’ wins are suspiciously lucky—and lucrative. Fia’s bosses believe Pizutti’s success is based on illegal drugs and deceitful methods, and they want Fia to work inside his barn to ferret out the truth.

But after witnessing the tragic and inexplicable suicide of a jockey, Fia discovers the rider’s death is only the tip on an iceberg involving the mob, a crooked racing hedge fund, and threats to the lives of another jockey and his young sister. Fia must find out who’s connected to who, and what shadowy forces are at play before someone else dies.


Praise For The Dark Side of Town: A Mystery (A Fia McKee Mystery #2)…

Praise for The Dark Side of Town:

"Hill brings an insider's knowledge to the world of high-stakes racing and accompanying crime. Filled with sense-laden descriptions and ever-tightening suspense, this is gripping mystery fare and a terrific successor to the racecourse mystery world first carved out by Dick Francis."—Booklist (starred)

"Fans of horse racing and everyone else will find this tale of love, lust, greed, and family ties an enjoyable ride."—Publishers Weekly

"The second in Sasscer Hill's Fia McKee series is as good as her first, and a great fun for anyone who likes horses and racing mixed into a page-turning investigation."—New Jersey.com

“A fast pace and a feisty heroine put Flamingo Road in the winner’s circle. Sasscer Hill is off to the races with her new character, Fia McKee, and I’m on board for that ride!”
—Tami Hoag

“Hill takes her readers on the ride of their lives as high-stakes crime collides with the adrenaline-fueled world of professional horse racing in Flamingo Road—a surefire winner, rich in authentic detail and heart-stopping suspense.”
—Andrew Grant

“Fans of Kinsey Millhone and V. I. Warshawski, there’s a new sheriff in town. Her name’s Fia McKee and she’s as smart, tough, impetuous, cynical, caring, infuriating, likeable, sassy, sexy, temperamental, and courageous as those illustrious predecessors. As for Sasscer Hill—the woman can flat-out write. She proves it with Flamingo Road, an intelligent and thrilling first book in what promises to be a great series.”
—David Housewright

“In her new thriller, Sasscer Hill ups the ante on her horses. Could she be the Dick Francis of her generation? Count me among those who would vote yes.”
—Margaret Maron

“Paced like a roller coaster ride, Flamingo Road is rich with authentic South Florida setting and racetrack detail as it races through a story of betrayal, family loyalty, illicit drugs, and a set of thugs that will keep you reading late into the night.”
—Mark Pryor

“Fast paced, suspenseful, and cleverly plotted—insider Sasscer Hill nails the high stakes world of horse racing. Her fierce and determined investigator Fia McKee will speed you to the finish line and leave you breathless. A winner!”
—Hank Phillippi Ryan

“Hill boasts a knowledge of horses and the very real problems in horse racing that fill this sound mystery with thrills and hair-raising action from first to last.”
—Kirkus Reviews

SASSCER HILL was an amateur steeplechase jockey, as well as a horse owner who bred, raised, and rode race horses for thirty years in Maryland. Her first published novel, Full Mortality, was nominated for both the Agatha and Macavity Best First Mystery Awards. Born in Washington, D.C., Hill earned a BA in English Literature from Franklin and Marshall College. She now lives with her husband, dog, and cat, in Aiken, SC., where she still enjoys horseback riding.
Loading...
or
Not Currently Available for Direct Purchase