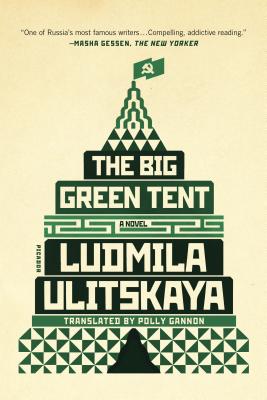 Long-listed for the 2016 Best Translated Book Award in Fiction

With epic breadth and intimate detail, Ludmila Ulitskaya’s remarkable work tells the story of three school friends who meet in Moscow in the 1950s and go on to embody the heroism, folly, compromise, and hope of the Soviet dissident experience. These three boys---an orphaned poet, a gifted yet fragile pianist, and a budding photographer with a talent for collecting secrets---struggle to reach adulthood in a society where their heroes have been censored and exiled.

Rich with love stories, intrigue, and a cast of dissenters and spies, The Big Green Tent offers a panoramic survey of life after Stalin and a dramatic investigation into the possibilities for individual integrity in a society defined by the KGB. Each of the central characters seeks to transcend an oppressive regime through art, a love of Russian literature, and activism. And each of them ends up face-to-face with a secret police that is highly skilled at provoking paranoia, division, and self-betrayal. Ludmila Ulitskaya’s novel ultimately belongs to the tradition of Dostoevsky, Tolstoy, and Pasternak: it is a work consumed with politics, love, and belief---and a discovery of light in dark times.


Praise For The Big Green Tent: A Novel…

“One of Russia’s most famous writers...Compelling, addictive reading.”—Masha Gessen, The New Yorker

“Never boring...You don’t have to be a compatriot to admire Ulitskaya’s honesty and straight-faced irony, or her uncanny ability to marshal endless digressions and intentional stumbles into a gripping tale.”—Leonid Bershidsky, The Atlantic

“Like that other plot-forward dissident, Nobel winner Boris Pasternak, Ulitskaya puts characters first and politics second. According to the oddsmakers, she might follow him to Stockholm one day.”—Boris Kachka, New York magazine

"The Big Green Tent, for all its grand ambition, manages an intimacy that can leave a reader reeling....a masterpiece."—Colin Dwyer, NPR

"This may be the Big Book of the year."—The Millions

"With both intimacy and cosmic scope, Russian novelist Ludmila Ulitskaya weaves an engaging tale of a group of cold war-era Soviet friends....Ulitskaya’s easy-going manner and sense of humor are attractive and it doesn’t take long to trust she knows what she’s doing....The translation, by Polly Gannon, is light and lively, wonderfully devoid of accent or awkwardnesses."—The Christian Science Monitor

"A very interesting read as Ulitskaya covers with breathless gusto a period of Russian history unfamiliar to most American readers....You’ll laugh, you’ll cry, you’ll occasionally want to throw the book across the room in frustration—but you’ll keep reading."—Daniel Kalder, The Dallas Morning News

"Often it is achievement enough for a writer to depict a vast array of characters with insight and great sensitivity for each; Ulitskaya does this and more....It is undeniable that with this novel Ulitskaya has pulled off a multipronged feat."—Kim Hedges, The Minneapolis Star Tribune

"As the book leaps effortlessly from year to year, character to character, it ingeniously tells the story of a generation that is at the same time in love with and at war with its homeland....A delight to read."—The Harvard Crimson

"One of the year’s best works of straightforward realism."—Flavorwire

"Ambitious and absorbing, The Big Green Tent carries its readers into the lost world of Soviet dissidents, and its hold is unwavering. This is a daring and moral work, but it is also, above all, a great story."—Peter Finn, coauthor of The Zhivago Affair: The Kremlin, the CIA and the Battle over a Forbidden Book

"A sweeping novel of life in the Cold War Soviet Union, with plenty between the lines about life in Putin’s Russia today....The greatest tragedy of Ulitskaya’s story is that it comes to an end. Worthy of shelving alongside Doctor Zhivago: memorable and moving."—Kirkus Reviews (starred review)

"For Western readers, the novel's sparkling imagery makes real the drab and dangerous Soviet era, with its scarcities and constant presence of the KGB. The characters are drawn with humor and melancholy yet endowed with hope and a love of literature. A great introduction for readers new to Ulitskaya."—Library Journal (starred review)

"One of the most important living Russian writers."—Gary Shteyngart, author of Super Sad True Love Story on Ludmila Ulitskaya

Ludmila Ulitskaya is one of Russia’s most popular and renowned literary figures. A former scientist and the director of Moscow’s Hebrew Repertory Theater, she is the author of more than a dozen works of fiction, including The Big Green Tent, several tales for children, and multiple plays that have been staged by a number of theaters in Russia and Germany. She has won Russia’s Man Booker Prize and was on the judges’ list for the Man Booker International Prize.

Polly Gannon is the director of cultural studies at the New York-St. Petersburg Institute of Linguistics, Cognition and Culture. She holds a Ph.D. in Russian Literature from Cornell University and is the co-translator of Word for Word by Lilianna Lungina. She lives, teaches, and translates in St. Petersburg, Russia.
Loading...
or support indie stores by buying on