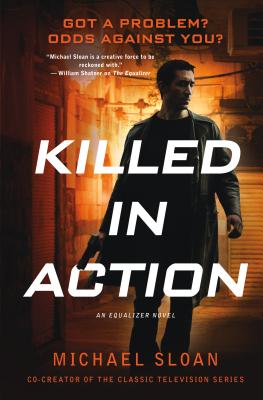 An Equalizer Novel (The Equalizer)

In Killed in Action, Michael Sloan, the co-creator of The Equalizer—the classic TV show now reimagined in a series starring Queen Latifah—presents an original story of the mysterious ex-intelligence operative using his skills to help people in desperate and dangerous situations.

“Got a problem? Odds against you? Call the Equalizer.”

Between seeking a young woman drawn into a white slavery ring and hunting a psychotic vigilante getting innocents killed in his war on New York City crime, Robert McCall is pushing himself beyond his limits to save lives.

Then McCall is approached by a United Nations diplomat. Her son, an American Captain in the US Army, is part of a contingent advising Syrian Rebel forces in their fight against the Jihadists. He has been reported KIA, but his body has not been found. She asks McCall to find out if her son is alive or dead.

During what appears to be a suicidal rescue mission in Syria, McCall stumbles upon a terror plot aimed at the United States. The terrorists are being protected by mercenaries known as Momento Miro—Remember That You Must Die. The key to the terror attacks is McCall’s one-time boss, Control, the head of a spy organization called “The Company.” He is also missing. His life has been deleted from all personal and intelligence records, as if he never existed.

Now, McCall has to find his old friend and stop these terror attacks from being carried out on American soil.


Praise For Killed in Action: An Equalizer Novel (The Equalizer)…

"In this fast-moving, episodic sequel to 2014’s The Equalizer...Sloan, the TV show’s creator, has a cinematic flair with description." — Publishers Weekly

"Another strong entry in the adventures of Robert McCall...this high-energy story, drenched in misdirection, will draw fans of Gregg Hurwitz’s Orphan X." — Booklist

"Michael Sloan is a creative force to be reckoned with." — William Shatner on The Equalizer

MICHAEL SLOAN has been a show runner on such TV series as Alfred Hitchcock Presents, Kung Fu: The Legend Continues and Outer Limits. He has also written and produced numerous TV Movies and features. He created the series The Equalizer for Universal TV and CBS and is currently producing a feature version of The Equalizer for Sony Pictures starring Denzel Washington in the title role. Michael is married to actress Melissa Anderson and they have two children, Piper and Griffin.
Loading...
or
Not Currently Available for Direct Purchase