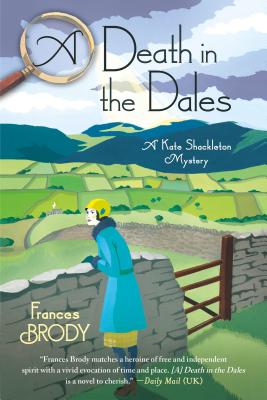 A Death in the Dales

An intricate plot set in the 1920s English countryside and Frances Brody's "refreshingly complex heroine" (Kirkus) Kate Shackleton make A Death in the Dales an absorbing 7th installment in this mystery, perfect for fans of Jacqueline Winspear and Agatha Christie.

A murder most foul

When the landlord of a Yorkshire tavern is killed in plain sight, Freda Simonson, the only witness to the crime, becomes plagued with guilt, believing the wrong man has been convicted. Following her death, it seems that the truth will never be uncovered in the peaceful village of Langcliffe...

A village of secrets

But it just so happens that Freda’s nephew is courting the renowned amateur sleuth Kate Shackleton, who decides to holiday in Langcliffe with her indomitable teenage niece, Harriet. When Harriet strikes up a friendship with a local girl whose young brother is missing, the search leads Kate to uncover another suspicious death, not to mention an illicit affair.

The case of a lifetime

As the present mysteries merge with the past’s mistakes, Kate is thrust into the secrets that Freda left behind and realizes that this courageous woman has entrusted her with solving a murder from beyond the grave. It soon becomes clear to her that nothing in Langcliffe is quite as it appears, and with a murderer on the loose and an ever-growing roster of suspects, this isn’t the holiday Kate was expecting...

Frances Brody's Kate Shackleton returns in A Death in the Dales with another mystery that's sure to "hold the reader attention and make them continue reading into the small hours of the night" (York Press, UK).


Praise For A Death in the Dales: A Kate Shackleton Mystery…

This, the seventh in Brody’s Kate Shackleton series, offers classic, English-countryside,cozy-mystery enjoyment…. Brody vividly portrays village life, with its narrow-mindedness and willingness to hide unpleasant truths, and ties up the many strands in a surprising, satisfying way.” —Historical Novel Society

It's very difficult to recommend further reading which comes up to the standard of the Kate Shackleton books. —The Bookbag