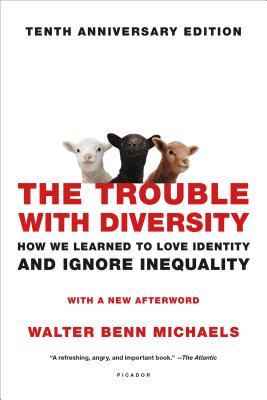 The Trouble with Diversity

How We Learned to Love Identity and Ignore Inequality

“Michaels has written a bracing polemic that should quicken the debate over what diversity really means, or should mean, in academia and beyond.”—The New York Review of Books

If there’s one thing Americans agree on, it’s the value of diversity. Our corporations vie for slots in the Diversity Top 50, our universities brag about minority recruiting, and every month is Somebody’s History Month. But in this “eloquent” (Chicago Tribune) and “captivating” (Los Angeles Times) book, Walter Benn Michaels argues that our enthusiastic celebration of “difference” masks our neglect of America’s vast and growing economic divide.

When it was first published in 2006, The Trouble with Diversity provoked a firestorm of praise and condemnation—not only hailed as “genius” (The Economist), “cogent” (The New Yorker), and “impossible to disagree with” (The Washington Post) it was excoriated as a “wildly implausible” product of “the ‘shock and awe’ school of political argument” (Slate) and “Seething, misplaced, amnesiac resentment” (The Nation). Now, a decade later, Michaels offers a new afterword on how our regime of equal-opportunity exploitation has only intensified. Magnificently iconoclastic, he demonstrates that commitments to diversity fail to offer a premise for social justice and in fact legitimize the economic forces that drive inequality rather than offering a resistance or even a critique. Most importantly, he makes the case that we should pay less attention to the illusory distinction of culture, and more attention to the real discrepancies of class and wealth.


Praise For The Trouble with Diversity: How We Learned to Love Identity and Ignore Inequality…

“This is a different line, and there's a touch of genius about it.” —The Economist.com

“Cogent... certain to be controversial.” —The New Yorker

“Rarely have I found myself more in agreement with a book's conclusion. To focus so obsessively on questions of diversity is, as Michaels rightly asserts, to opt for a politics of symbolism over a politics of results.” —Slate

“Bracing... the greatest virtue of The Trouble With Diversity is the tenacity and precision with which Michaels dissects out muddled ideas about race and inequality.” —The Nation

Walter Benn Michaels is a professor of English at the University of Illinois at Chicago. “One of the most influential Americanists of his generation” (The Chronicle of Higher Education), he is the author of Our America and has contributed to The New York Times Magazine, The Boston Globe, and n+1. He lives in Chicago.
Loading...
or support indie stores by buying on