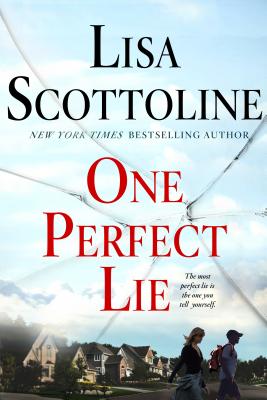 Enthralling and suspenseful, Lisa Scottoline's New York Times bestseller, One Perfect Lie, is an emotional thriller and a suburban crime story that will have readers riveted up to the shocking end, with killer twists and characters you won’t soon forget.

"Scottoline keeps the pace relentless as she drops a looming threat into the heart of an idyllic suburban community, causing readers to hold their breath in anticipation." –Booklist

"Readers can be assured that the author nails the high school milieu, from athletic rivalries to sexting...they're in for one thrilling ride." –Kirkus Reviews

"Entertaining...This fast-paced read culminates in a daring chase that would play well on the big screen." –Publishers Weekly

On paper, Chris Brennan looks perfect. He's applying for a job as a high school government teacher, he's ready to step in as an assistant baseball coach, and his references are impeccable.

But everything about Chris Brennan is a lie.

Susan Sematov is proud of her son Raz, a high school pitcher so athletically talented that he's being recruited for a full-ride scholarship to a Division I college, with a future in major-league baseball. But Raz’s father died only a few months ago, leaving her son in a vulnerable place where any new father figure might influence him for good, or evil.

Heather Larkin is a struggling single mother who lives for her son Jordan's baseball games. But Jordan is shy, and Heather fears he is being lured down a dark path by one of his teammates, a young man from an affluent family whose fun-loving manner might possibly conceal his violent plans.

Mindy Kostis succumbs to the pressure of being a surgeon's wife by filling her days with social events and too many gin and tonics. But she doesn’t know that her husband and her son, Evan, are keeping secrets from her – secrets that might destroy all of them.

At the center of all of them is Chris Brennan. Why is he there? What does he want? And what is he willing to do to get it?


Praise For One Perfect Lie…

"In novel after novel, Lisa Scottoline has proven herself a master of stories that combine familial love — especially that of mothers for their children — with nail-biting stories of spirited everywomen bent on finding the truth. Her new novel, Most Wanted, demonstrates again her skill with this kind of domestic suspense tale." – The Washington Post

"This is a potboiler of a book, crammed full of agonizing choices confronting appealing, relatable characters. Scottoline has penned more hardboiled tales, but never one as heartfelt and emotionally raw, raising her craft to the level of Judith Guest and Alice Hoffman. Most Wanted is a great thriller and a gut-wrenching foray into visceral angst that is not to be missed." – The Providence Journal

A suburban crime tale told with Scottoline’s penchant for humor and soul-baring characterization."
– Booklist on Most Wanted

"A page-turner that will satisfy." – Library Journal on Most Wanted

"A Connecticut teacher’s long-sought and hard-fought pregnancy turns into a nightmare when Scottoline unleashes one of her irresistible hooks on her." – Kirkus Reviews on Most Wanted

“Scottoline knows how to keep readers in her grip.” –The New York Times Book Review

"A virtuoso of suspense, fast action, and intricate plot." —The Washington Post

“Scottoline is a powerhouse.” –David Baldacci

"Scottoline has plenty of tricks up her sleeve." —Booklist

"Scottoline grabs her readers by the jugular and won't let go." —Library Journal

“Scottoline writes riveting thrillers that keep me up all night, with plots that twist and turn.” –Harlan Coben