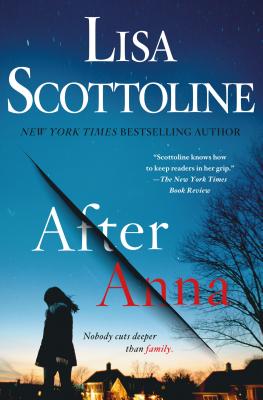 Riveting and disquieting, After Anna is a groundbreaking domestic thriller, as well as a novel of emotional justice and legal intrigue. New York Times bestselling author Lisa Scottoline keeps readers on their toes until the final shocking page.

Dr. Noah Alderman, a widower and single father, has remarried a wonderful woman, Maggie Ippolitti, and for the first time in a long time, he and his young son are happy. Despite her longing for the daughter she hasn’t seen since she was a baby, Maggie is happy too, and she’s even more overjoyed when she unexpectedly gets another chance to be a mother to the child she thought she'd lost forever, her only daughter Anna.

"A deliciously distracting thriller...Scottoline illuminat[es] the landing strip of revelations and truths in a deliciously slow and intense way." —The Washington Post on After Anna

"Scottoline keeps the pace relentless as she drops a looming threat into the heart of an idyllic suburban community, causing readers to hold their breath in anticipation." —Booklist on One Perfect Lie

"Readers can be assured that the author nails the high school milieu, from athletic rivalries to sexting...they're in for one thrilling ride." —Kirkus on One Perfect Lie


Praise For After Anna…

Praise for After Anna:

"A deliciously distracting thriller...Scottoline illuminat[es] the landing strip of revelations and truths in a deliciously slow and intense way." —The Washington Post

"Filled with plenty of twists and complex characters, this entertaining story builds to a satisfying conclusion." —Publishers Weekly

Praise for One Perfect Lie:

"Scottoline keeps the pace relentless as she drops a looming threat into the heart of an idyllic suburban community, causing readers to hold their breath in anticipation." —Booklist

"Readers can be assured that the author nails the high school milieu, from athletic rivalries to sexting...they're in for one thrilling ride." —Kirkus

1. After Anna is told in alternating perspectives and several different timelines. What did you think of this unique structure and what did it add to your reading experience?

3. Anna was used as a pawn by her father, and he wielded his power and money, and even lied to Anna to keep her away from Maggie. What do you think motivated him to do it? What do you think his motivation was for doing it? What was your initial reaction when Maggie learned the truth about Anna’s father? Were you instantly suspicious, or did you believe Anna’s explanation? How did that affect your opinion of Anna throughout the rest of the novel?

4. Throughout the trial sections of the novel, damning evidence against Noah begins to build, from texts on his phone to official government documents. Were you convinced by the evidence? Why or why not? Did you think he was guilty – of murder or anything else?

5. When Anna enters their home, Maggie and Noah have to renegotiate their parental boundaries and the household rules. How do you manage this in your own household? How does Anna having a large amount of money complicate this, and how do you think you would navigate a similar situation? Is there a right or wrong way to go about it?

6. On page 81, Anna’s lawyer says, “Every girl needs a mother, doesn’t she?” Who do you turn to when you need mothering, whether your biological mother or someone else? Do you think we ever grow out of needing our mother?

7. When did you begin to get suspicious of Anna’s erratic behavior? What struck you as particularly odd? How do you think your understanding of the novel would change if you read it again, knowing the outcome?

8. What do you think about the ethics of Kathy and Maggie looking through Anna’s books for notes – are teenagers entitled to a certain level of privacy? Was it right, wrong, or more complicated than that? Why do you think this?

9. Near the end of the novel, Maggie thinks that she must push through, “Because she was a mother, and she had a job to do.” Where can you see this theme of what mothers would do for their daughters throughout the book? What kind of power do you think there is in a mother/daughter bond?