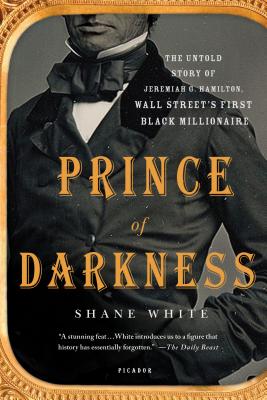 In the middle decades of the nineteenth century, Jeremiah G. Hamilton was a well-known figure on Wall Street. And Hamilton was African American. Although his origins were lowly, possibly slave, he was reportedly the richest black man in the United States, possessing a fortune of two million, or in excess of two hundred and fifty million in today’s currency. In Prince of Darkness: The Untold Story of Jeremiah G. Hamilton, Wall Street's First Black Millionaire, a groundbreaking account, eminent historian Shane White reveals the larger-than-life story of a man who defied every convention of his time.

SHANE WHITE is the Challis Professor of History and an Australian Professorial Fellow in the History Department at the University of Sydney specializing in African-American history. He has authored or co-authored five books, including Playing the Numbers, and collaborated in the construction of the website Digital Harlem. Each project has won at least one important prize for excellence from institutions as varied as the American Historical Association and the American Library Association. He lives in Sydney, Australia.

"This is historical detective work of the highest magnitude... Indeed, the feeling the book left the prize committee with after its 300-plus pages was: how could the story of an American character this fascinating nothave been written before?" —2015 SHEAR Best Book Prize citation

“If this Hamilton were around today, he might have his own reality TV show or be a candidate for president...An interesting look at old New York, race relations and high finance.” —New York Post

“White details his incredible life, marriage to a white woman, and contentious presence on Wall Street, in the process revealing the ways that historians reconstruct the past. An engaging look at an extraordinary man.” —Booklist

“Hamilton's story is gripping; so, too, is his puzzling near disappearance from the historical record. White does an excellent job drawing out the facts of Hamilton's life and supplementing them with details from the history of Wall Street and of other African American New Yorkers of the era.” —Library Journal

“Pieces together the remarkable career of an antebellum Wall Street broker who was married to a white woman, ambitious, ruthless, successful, and black: in short, "a racist's nightmare come to life." ... Superb scholarship and a sprightly style recover an unaccountably overlooked life.” —Kirkus Reviews

“Shane White employs the superb skills of an accomplished historian to narrate the compelling story of a New York Hamilton who commanded front page news attention in his day and faded into obscurity in the years that followed. Jeremiah Hamilton was not only America's first black millionaire, he was a ruthless businessman and trader who sparked fear, contempt, jealousy and a range of other emotions from contemporaries and adversaries. A fine read, I highly recommend this important new book.” —Earl Lewis, President, The Andrew W. Mellon Foundation and co-author with Heidi Ardizzone, LOVE ON TRIAL

“Shane White's impeccably researched book offers a compelling history of Jeremiah Hamilton, America's first black Wall Street millionaire. Prince of Darkness tells the complex story of race and wealth in antebellum New York, with a mysterious and sometimes purposefully ambiguous character at its center. From the islands of the Caribbean to Gotham, Hamilton welded together grit and intellectual agility that propelled him into unimaginable wealth. Unlike his African American contemporaries, Jeremiah Hamilton was less concerned with respectability politics or racial uplift. The "Prince of Darkness" was a man who wanted to be rich, and nothing would stand in his way.” —Erica Armstrong Dunbar, author of A FRAGILE FREEDOM: African American Women and Emancipation in the Antebellum City

“At a time when Gotham was virtually inventing segregation, long before the South did, a black man bulled his way into Wall Street, the city's whitest citadel, and ruthlessly made a fortune there. He challenged social codes, too, marrying a white woman, living in a mansion, and was nearly lynched from a lamppost for his transgressions. Yet after his vivid life Jeremiah G. Hamilton vanished completely from New York's collective memory. Happily Professor White, in a bravura display of historical sleuthing, has brought the so-called Prince of Darkness back into the light, and illuminated Hamilton's city as well.” —Mike Wallace, co-author of GOTHAM, winner of the Pulitzer Prize