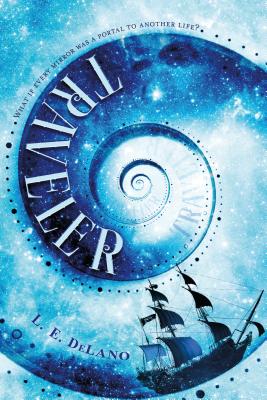 Dreams and the real world collide in this twisting, time-bending fantasy about family, friendship, and how love can span every reality.

Jessa has spent her life dreaming of other worlds and writing down stories more interesting than her own, until the day her favorite character, Finn, suddenly shows up and invites her out for coffee. After the requisite nervous breakdown, Jessa learns that she and Finn are Travelers, born with the ability to slide through reflections and dreams into alternate realities. But it’s not all cupcakes, pirates, and fantasy lifestyles - Jessa is dying over and over again in every reality, and Finn is determined that this time, he’s going to stop it… This Jessa is going to live.

Chosen by readers like you for Macmillan's young adult imprint Swoon Reads, E.L. DeLano’s debut novel Traveler is a perfectly plotted fantasy, full to the brim with fantastical settings and a romance that will make your heart race

"“DeLano’s debut novel is full of mystery, action, and romance. Her masterful storyline will keep readers guessing until the very last sentence." —VOYA

"Absorbing...DeLano has taken the love triangle and made it fresh again with inventive, paranormal twists and well-developed settings. With each new Jessa, readers will become intrigued with a different character's story even as they root for the original Jessa to stay safe. Featuring skillful world-building and carefully plotted suspense, this novel will leave readers eagerly awaiting the sequel." — School Library Journal

“DeLano’s debut novel is full of mystery, action, and romance. Her masterful storyline will keep readers guessing until the very last sentence...DeLano’s portrayal of a young man affected by autism shows the author’s sensitivity and knowledge and will be appreciated by those with relatives or friends diagnosed with the disorder...With a cliffhanger ending, readers will be anxiously awaiting the sequel to discover the fate of Jessa and Finn.” —VOYA

L.E. DeLano is a blogger and autism advocate under her alternate moniker, Ellie DeLano. She comes equipped with a "useless" Theatre degree that has opened doors for her in numerous ways. Though mostly raised in New Mexico, she now calls Pennsylvania home. When she's not writing, which is almost never, she's binge-watching Netflix and trying her best not to be an unwitting pawn her cat's quest for world domination. She is the author of the young adult novels Traveler and Dreamer.
Loading...
or
Not Currently Available for Direct Purchase