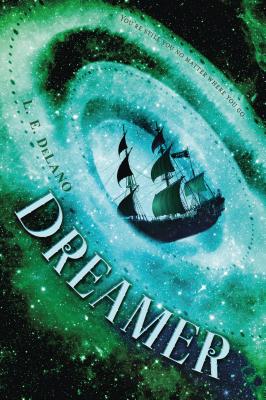 This thrilling sequel to Traveler doles out adventure and heartbreak in equal measure as it takes readers through a kaleidoscope of intricately crafted worlds of wonder, discovery, and danger.

You’re still you no matter where you go.

Jessa has learned the hard way that traveling to alternate dimensions isn’t all delicious, glittering desserts and fancy parties: it also means accidentally running into people she thought she'd never see again. Still mourning a devastating loss, Jessa isn’t really prepared for the arrival of a reckless version of someone she once loved who is now bent on revenge. Add an increasingly complicated relationship with her best friend Ben, the reappearance of an old enemy, and the threat of the multiverse collapsing, and Jessa’s got a lot on her plate. She may be destined to help save an infinite multitude of worlds… but in the end, all Jessa really wants to do is save her friends.

In Dreamer, the young adult fantasy follow up to Traveler, author L. E. DeLano delivers a gripping, emotional story that will leave readers on the edge of their seat.

“DeLano’s debut novel is full of mystery, action, and romance. Her masterful storyline will keep readers guessing until the very last sentence.” —VOYA

"DeLano has done it again. Her masterful blending of parallel worlds takes a complex idea of quantum physics and makes it easy to follow, while also creating a gripping sci-fi novel that will have readers on the edge of their seats. ... DeLano has spun a fun, genre-bending series that includes love, coming-of-age, and relatable protagonists who will resonate with teens." — School Library Journal

"An entertaining and satisfying conclusion to the Traveler duology....The pace is brisk with a fine balance of action, mystery, and romance in short chapters that will hold the reader’s attention. Readers who enjoy Claudia Gray’s Firebird trilogy and Kerstin Gier’s Silver trilogy will find much to enjoy in this romantic fantasy."—VOYA

"Absorbing...DeLano has taken the love triangle and made it fresh again with inventive, paranormal twistsand well-developed settings. With each new Jessa, readers will become intrigued with a different character's story even as they root for the original Jessa to stay safe. Featuring skillful world-building and carefully plotted suspense, this novel will leave readers eagerly awaiting the sequel." — School Library Journal

L.E. DeLano is a blogger and autism advocate under her alternate moniker, Ellie DeLano. She comes equipped with a "useless" Theatre degree that has opened doors for her in numerous ways. Though mostly raised in New Mexico, she now calls Pennsylvania home. When she's not writing, which is almost never, she's binge-watching Netflix and trying her best not to be an unwitting pawn her cat's quest for world domination. She is the author of the young adult novels Traveler and Dreamer.
Loading...
or
Not Currently Available for Direct Purchase