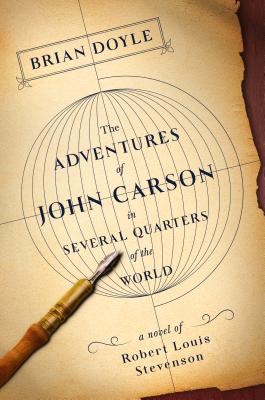 The Adventures of John Carson in Several Quarters of the World

A Novel of Robert Louis Stevenson

"[A] triumph...If a writer is going to put on Stevenson’s voice, he’d better, as the poets say, 'bring it.' Reader, Doyle has brought it...Adventures is a tonic for our bitter times." —Washington Post

The young Robert Louis Stevenson, living in a boarding house in San Francisco in the 19th century while waiting for his beloved’s divorce from her feckless husband, dreamed of writing a soaring novel about his landlady’s adventurous and globe-trotting husband—but he never got around to it. And very soon thereafter he was married, headed home to Scotland, and on his way to becoming the most famous novelist in the world, after writing such classics as Treasure Island, The Strange Case of Dr. Jekyll and Mr. Hyde, and Kidnapped.

But now Brian Doyle brings Stevenson’s untold tale to life, braiding the adventures of seaman John Carson with those of a young Stevenson, wandering the streets of San Francisco, gathering material for his fiction, and yearning for his beloved across the bay. An adventure tale, an elegy to one of the greatest writers of our language, a time-traveling plunge into The City by the Bay during its own energetic youth, The Adventures of John Carson in Several Quarters of the World is entertaining, poignant, and sensual.


Praise For The Adventures of John Carson in Several Quarters of the World: A Novel of Robert Louis Stevenson…

"Picaresque...Doyle has mastered the trick of channeling the Scot's distinctive voice and cadence through his own memorable style." —The Oregonian

"[A] triumph...If a writer is going to put on Stevenson’s voice, he’d better, as the poets say, “bring it.” Reader, Doyle has brought it...Adventures is a tonic for our bitter times." —Washington Post

“An accomplished writer celebrates the nascent inspiration of a legendary one in this tender, affectionate, and terribly fun homage to the joys of storytelling and storytellers.” —Kirkus Reviews

“Doyle’s irresistible novel, which practically begs to be read aloud, is a triumphant ode to the power of storytelling.” —Booklist

"Rich prose and a unique perspective on one of the world’s most beloved authors...A fine homage to the writing of Stevenson that will suck you into the mind of a working writer." —Publishers Weekly

"A tale of bounding energy with a delicate touch, driving always towards the beautiful and the true." —Helen Garner, author of The Spare Room

“In Brian Doyle's The Adventures of John Carson in Several Quarters of the World, a character describes the Bay Area as notable for ‘a certain profligacy of creation.’ That's an apt descriptor for the book itself, a richly layered, altogether enchanting re-imagining of a few months in the life of Robert Louis Stevenson. An homage to the great Scottish writer, a collection of tales both adventurous and romantic, a love letter to San Francisco--it is all of these things. But most of all it is a compelling and profound meditation on the power of stories and story-telling to console and clarify, to carry us out of ourselves, and to connect us each to each in our common humanity. A rare book that is both entirely entertaining and entirely good for you.” —Naomi Williams, author of Landfalls