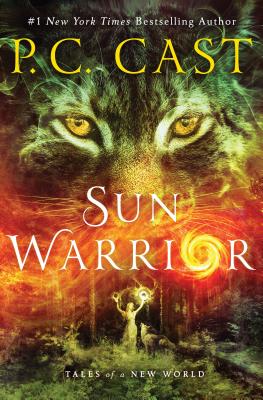 The blockbuster bestselling series is back!

#1 New York Times bestselling author of the House of Night series, P.C. Cast, brings us Sun Warrior, an epic fantasy set in a world where humans, their animal allies, and the earth itself has been drastically changed. A world filled with beauty and danger and cruelty…

The battle lines have been drawn and Mari, an Earth Walker and Nik, a Companion, who were once from rival clans now find themselves fighting to save each other and their people from destruction.

Thaddeus betrayed his own people, killing Nik’s father and destroying their entire clan. But he wants more. He wants the power he believes Mari has stolen from him and his people and he will do anything he must to get them back, even if it means destroying everything in his path. There is only way to stop Thaddeus, but it means a harrowing journey for Mari and Nik into the heart of darkness. Meanwhile, Dead Eye becomes a willing vessel for the newly awakened god, Death. Death has plans of his own and he, too, will use whatever and whomever he must, including the mad Thaddeus.


Praise For Sun Warrior: Tales of a New World…

"A mind-blowing and imaginative story ...Cast’s imagination knows no bounds and it will be interesting to see what new ideas arise when she puts pen to paper next." -- Romantic Times on Sun Warrior

“Cast’s spectacular new series kicks off with a unique tale suitable for fans of fantasy both young and old. Earth has completely changed, and the author grants readers a chance to use their imagination as the engaging storyline rapidly unfolds.” – Romantic Times, 4 stars!

"While many fantasy series style themselves as epic, this one may actually be worthy of the description. Fantasy lovers who are fans of Cinda Williams Chima's "Seven Realms" novels will fall in love with Mari and Nik." – School Library Journal