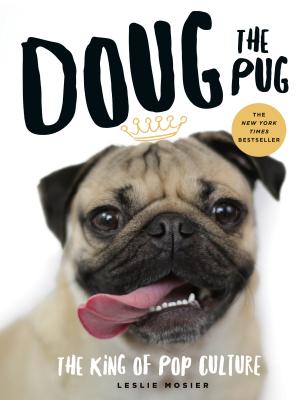 The King of Pop Culture

Doug the Pug is the king of pop culture. More than seven million adoring fans on Facebook, Instagram, Twitter, and Snapchat can’t get enough of him. Doug spreads love everywhere he goes, and now with his literary debut, he’s coming to living rooms around the world.

It’s hard to find a more well-connected pup than Doug. He’s homies with the hottest stars out there: Justin Bieber, Steven Tyler, Ed Sheeran, John Legend, and Chrissy Teigen, to name just a few. Did you catch him in Fall Out Boy’s latest music video? Doug can ball with the best of them. He’s a rising star and everyone’s favorite squishy face. Doug has made appearances at music festivals including Lollapalooza and the Billboard Hot 100 Music Fest, but he doesn’t let fame go to his head.

Doug is a humble pug, but the people have asked for more, so he’s obliged with this awesome New York Times bestselling collection of photos. Doug is a fashion icon, a culinary gourmand, a music enthusiast, and an all-around happenin’ guy. This book is just a sneak peek at some of his greatest adventures so far. From his furry heart to yours, enjoy!


Praise For Doug the Pug: The King of Pop Culture…

"We, like the rest of the world, can't get enough of this squishy-faced pup. The adorable antics of this Instagram-famous dog showcase the true meaning of 'Pug Life'."—Modern Dog Magazine

"Doug the Pug is at it again. This time, he has recreated Justin Bieber's famous photo shoots...You are probably already following the mushy-faced phenom, but if you aren't, then you are missing out." —HNGN.com

"What Doug seems to do best is meet celebs (or make dream-cameos) while wearing the most ridiculous-slash-baller wigs and outfits". —MTV.com

“Leslie and Doug are quite possibly the cutest best friends in the entire world. . . . Keep doing your thing, Leslie and Doug. Your cuteness is unbeatable.” —BuzzFeed Animals

“Just call him ‘the King of Pop Culture.’” —USA Today

“We are all this pug named Doug, whose only real Christmas wish is food.” —Time.com

LESLIE MOSIER is a graphic designer, social media mogul, and the mastermind behind media-magnet Doug The Pug. She got her start as Director of New Media at Aware Records in Nashville, Tennessee. She successfully branched out to manage Doug’s career full-time in May 2015. Mosier’s branding skills paired with her freelance graphic design business have made the squishy pug face a social media pop-icon, which is only the beginning.
Loading...
or
Not Currently Available for Direct Purchase