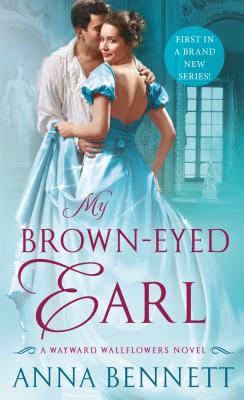 NEVER SEND A DEBUTANTE
William Ryder, Earl of Castleton, is at the end of his noble rope. Not only has he broken ties with his longtime mistress, his mother has publicly announced her wish for him to marry a suitable young lady—if only to help him raise the twins left in his care. Hiring a governess should solve some of Will’s problems…but when he meets the candidate in question, he finds himself in an entirely new predicament.

TO DO A WALLFLOWER’S JOB
Miss Margaret Lacey is brainy, beautiful, and, once upon a time, Will’s betrothed. But she bowed out of the engagement—and, since then, has never been the same. A tragic accident robbed her of everything, and now, at age twenty-three, her marital prospects are slim to none. Penniless but not without pride, Meg convinces the vexingly handsome Will to hire her for the job. What neither of them could have expected from this arrangement, however, is an attraction that burns stronger than ever. Are these two lost souls finally ready to be schooled in the art of love?

Don’t miss the Wayward Wallflower books by Anna Bennett!
My Brown-Eyed Earl (Book 1)
I Dared the Duke (Book 2)
The Rogue is Back in Town (Book 3)

What Reviewers are saying:

“A new favorite among romance enthusiasts!” - BookPage on I Dared the Duke

"Heart, humor, and a hot hero. Everything I look for in a great romance novel!" - Valerie Bowman on My Brown-Eyed Earl

"One bliss-giving read...witty and whimsical." - USA Today Happily Ever After on My Brown-Eyed Earl

Anna Bennett started swiping romances from her mom’s bookshelf as a teenager and decided that books with balls, dukes, and gowns were the best. So, when she had the chance to spend a semester in London she packed her bags—and promptly fell in love with the city, its history, and its pubs. She dreamed of writing romance, but somehow ended up a software analyst instead.

Fortunately, a few years and a few careers later, Anna found her way back to writing the stories she loves and won the Romance Writers of America’s Golden Heart®. She lives in Maryland with her husband and three children, who try valiantly not to roll their eyes whenever she quotes Jane Austen. Other weaknesses include reality TV, cute shoes, and coffee. Lots and lots of coffee.

Anna's books include of the Wayward Wallflowers series and the Debutante Diaries series.