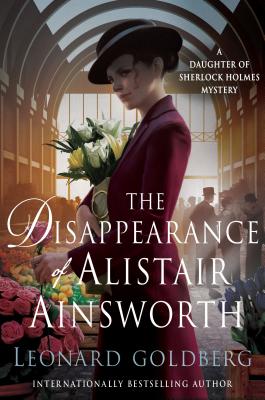 The Disappearance of Alistair Ainsworth

In the third book of this critically-acclaimed series, Sherlock Holmes' daughter faces a new unsolvable mystery with spies and a threat to the crown.

Joanna and the Watsons receive an unexpected visitor to 221b Baker Street during a nocturnal storm. A rain-drenched Dr. Alexander Verner arrives with a most harrowing tale.

Verner has just returned from an unsettling trip to see a patient who he believes is being held against his will. Joanna quickly realizes that Verner's patient is a high-ranking Englishman who the Germans have taken captive to pry vital information about England’s military strategies for the Great War. The man is revealed to be Alistair Ainsworth, a cryptographer involved in the highest level of national security.

The police are frantic to find Ainsworth before the Germans can use him to decode all of England’s undeciphered messages. Ainsworth must be found at all costs and Joanna and the Watsons might be the only ones who can connect the clues to find him.

"Fans of all things Sherlock-ian will delight in Joanna, so like her father and already training her schoolboy son, Johnny, in the methods that have solved so many cases like this exceptionally tricky one." —Kirkus Reviews

Praise for A Study in Treason:

"Goldberg matches the style of Conan Doyle's stories and adds the fillip of a female protagonist." —Kirkus Reviews

"There is plenty of pleasure to be found here for lovers of Holmes pastiches." —Booklist

"The plot is quick paced and is sprinkled with unforeseen clues that enhance the overall story. Leonard Goldberg is a great writer and brings to life the legend of Sherlock Holmes." —RT Book Reviews (4 stars)

"Fans of Sherlock Holmes are in for a treat with A Study in Treason: A Daughter of Sherlock Holmes Mystery by Leonard Goldberg. The mystery tests the mind and forensic skills of the private eye's heir in the new novel..." —National Examiner

"An extraordinarily entertaining mystery. This is a gift to the fans of Sherlock Holmes." —The Washington Book Review


Praise for The Daughter of Sherlock Holmes:

"The Daughter of Sherlock Holmes is a nicely rendered tale that will appeal to Sherlockian readers of all shades. The language and settings are faithful to Arthur Conan Doyle's original stories. John Jr. acts as narrator rather than Dr. Watson, and Joanna is an alluring replacement for the great detective." —Mystery Scene

Leonard Goldberg is the USA Today bestselling author of the Joanna Blalock medical thrillers. His novels have been translated into a dozen languages and were selections of the Book of the Month Club, French and Czech book clubs, and The Mystery Guild. They were featured as People’s “Page-Turner of the Week” and at the International Book Fair. After a long career affiliated with the UCLA Medical Center as a Clinical Professor of Medicine, he now lives on an island off the coast of Charleston, SC.
Loading...
or
Not Currently Available for Direct Purchase