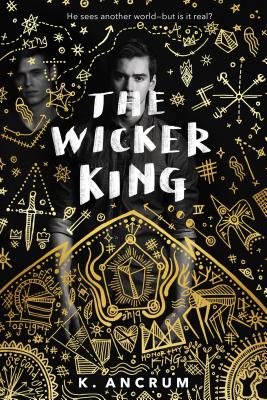 The Wicker King is a psychological young adult thriller that follows two friends struggling as one spirals into madness.

Jack once saved August's life . . . now can August save him?

August is a misfit with a pyro streak and Jack is a golden boy on the varsity rugby team—but their intense friendship goes way back. Jack begins to see increasingly vivid hallucinations that take the form of an elaborate fantasy kingdom creeping into the edges of the real world. With their parents’ unreliable behavior, August decides to help Jack the way he always has—on his own. He accepts the visions as reality, even when Jack leads them on a quest to fulfill a dark prophecy.

August and Jack alienate everyone around them as they struggle with their sanity, free falling into the surreal fantasy world that feels made for them. In the end, each one must choose his own truth.

Written in vivid micro-fiction with a stream-of-consciousness feel and multimedia elements, K. Ancrum's The Wicker King touches on themes of mental health and explores a codependent relationship fraught with tension, madness and love.


Praise For The Wicker King…

“Ancrum delves into the blurry space between reality and madness. A haunting and provocative read that will keep teens riveted.” —School Library Journal

“Teen fans of moody psychological horror will be entranced.” —Booklist

“Give this to readers who like complex, experimental fictions about intense relationships that acquire mythic resonance.” —The Bulletin of the Center for Children's Books

“An eerie and mesmerizing thriller that questions the space where reality and perception overlap, The Wicker King is a spine-tingling read that will have you riveted.” —Caleb Roerhrig, author of Last Seen Leaving and White Rabbit

K. Ancrum is the author of the award-winning thriller The Wicker King, the interstellar lesbian romance The Weight of the Stars, and the Peter Pan thriller Darling. Ancrum is a Chicago native passionate about diversity and representation in young adult fiction. She currently writes most of her work in the lush gardens of the Chicago Art Institute.
Loading...
or support indie stores by buying on