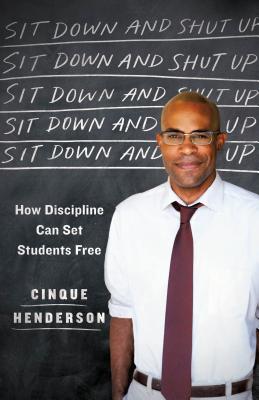 Sit Down and Shut Up

How Discipline Can Set Students Free

On his very first day of school as a substitute teacher, Cinque Henderson was cursed at and openly threatened by one of his students. Not wanting trouble or any broken bones, Henderson called the hall monitor, who escorted the student to the office. But five minutes later the office sent him back with a note that read, “Ok to return to class.” That was it: no suspension, no detention, no phone call home, nothing.

Sit Down and Shut Up: How Discipline Can Set Students Free is a passionate and personal analysis of Henderson's year as substitute teacher in some of America’s toughest schools. Students disrespected, yelled at, and threatened teachers, abetted by a school system and political culture that turned a willfully blind eye to the economic and social decline that created the problem.

Henderson concludes that the failures of our worst schools are the result of a population in crisis: classrooms are microcosms of all our nation’s most vexing issues of race and class. The legacy and stain of race—the price of generational trauma, the cost of fatherlessness, the failures of capitalism, the false promise of meritocracy—played itself out in every single interaction Henderson had with an aggressive student, an unengaged parent, or a failed administrator.

In response to the chaos he found in the classroom, Henderson proposes a recommitment to the notion that discipline—wisely and properly understood, patiently and justly administered—is the only proper route to freedom and opportunity for generations of poor youth. With applications far beyond the classroom, Henderson’s experiences offer novel insights into the pressing racial, social, and economic issues that have shaped America’s cultural landscape.

Sure to ignite discussion and controversy, Sit Down and Shut Up provides a frank evaluation of the broken classrooms of America and offers a bold strategy for fixing them.


Praise For Sit Down and Shut Up: How Discipline Can Set Students Free…

"Reporting on his experiences as a substitute teacher in more than fifty schools in Los Angeles county, writer Cinque Henderson chronicles the challenges of instructing students whose lives are often marked by chaos at home and lack of discipline in school. Much more than a screed against cursing, vulgarity, and violence against teachers, this volume provides a history of social conditions that lead to troubled schools as well as concrete suggestions for steps to address these issues. Henderson’s deep commitment to public schools and his own students is evident in this readable, compelling, and important account." —Henry Louis Gates, Jr. Alphonse Fletcher University Professor, Harvard University

"Get this book to every principal, school board member and superintendent in your community."—Larry Wilson, Pasadena Star-News

Cinque Henderson is a graduate of Harvard University. He has written for HBO's The Newsroom and is currently a writer for Showtime's, The Chi. His work has appeared in the Washington Post, the LA Review of Books, Newsweek and newyorker.com. Sit Down and Shut Up is his first book.
Loading...
or
Not Currently Available for Direct Purchase