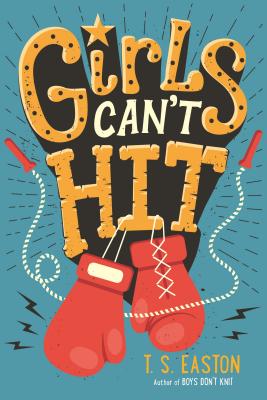 Fleur Waters never takes anything seriously--until she shows up at her local boxing club one day to prove a point. She's the only girl there, and the warm-up alone is exhausting . . . but the workout gives her an escape from home and school, and when she lands her first uppercut on a punching bag she feels a rare glow of satisfaction.

So she goes back the next week, determined to improve. Fleur's overprotective mom can't abide the idea of her entering a boxing ring (why won't she join her pilates class instead?). Her friends don't get it either and even her boyfriend, 'Prince' George, seems concerned by her growing muscles and appetite--but it's Fleur's body, Fleur's life. So she digs in her heels in hope that she can overcome the obstacles and strike a blow for equality.

"Here Easton offers up a cheeky, girl-centric counterpoint to his acclaimed Boys Don’t Knit (2015). Lighthearted and irreverent, this British import is a feminist sports story rooted in humor. Readers will enjoy watching smart-mouthed Fleur gain confidence as a boxer and as a young woman, and the always-popular underdog sports narrative will attract many readers."--Booklist

"As Fleur learns to keep her guard up and hit as well as defend, Easton’s signature humor delivers plenty of stylistic punches along the way, demonstrating that feminism can be funny even while the book offers genuine inspiration for girls to join the fight."--Bulletin of the Center for Children's Books

"Full of funny moments, this sequel features a quick-witted young woman discovering herself by embracing possibilities and trying something new. An author’s note speaks to Easton’s understanding of his bias and male privilege, which may assuage some readers’ concerns. VERDICT Especially alongside its predecessor, it’s a real one-two punch. Many will want to consider as a first purchase."--School Library Journal

T. S. Easton is an experienced author of fiction for all ages in the UK. He lives in Surrey with his wife and three children. Boys Don't Knit received a Carnegie Medal nomination (2015).
Loading...
or
Not Currently Available for Direct Purchase