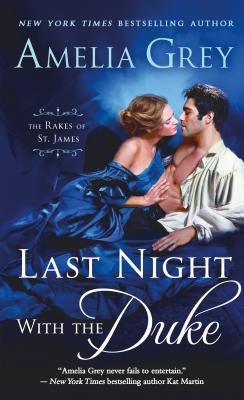 Last Night with the Duke

The Rakes of St. James

Could finding love be his greatest scandal of all?

The Duke of Griffin has never lived down his reputation as one of the Rakes of St. James. Now rumors are swirling around London that his twin sisters may bear the brunt of his past follies. Hiring a competent chaperone is the only thing Griffin has on his mind--until he meets the lovely and intriguing Miss Esmeralda Swift. In ways he could never have expected, she arouses more than just his curiosity.

Esmeralda Swift considered herself too sensible to ever fall for a scoundrel, but that was before she met the irresistibly seductive Duke of Griffin. His employment offer proves too tempting for her to resist. She can’t afford to be distracted by his devilish charms because the stakes are so high for his sisters’ debut Season. . .unless one of London’s most notorious rakes has had a change of heart and is ready to make Esmeralda his bride in Last Night with the Duke, the first novel in the brand-new Regency Rakes of St. James series by New York Times bestselling author Amelia Grey.


Praise For Last Night with the Duke: The Rakes of St. James…

"A great start to a new series." —Romance Reviews Today

"Grey charms readers with the first in her Rakes of St. James series, a tale filled with romance, fun and enchantment. A quick, charming read from a shining voice of the genre." —RT Book Reviews

"An enchanting and lovely start to a new series." —The Reading Wench

New York Times and USA Today bestselling author Amelia Grey read her first romance book when she was thirteen and she's been a devoted reader of love stories ever since. Her awards include the Booksellers Best, Aspen Gold, and the Golden Quill. Writing as Gloria Dale Skinner, she won the coveted Romantic Times Award for Love and Laughter, and the prestigious Maggie Award. Her books have sold to many countries in Europe, Indonesia, Turkey, Russia, and Japan. Several of her books have also been featured in Doubleday and Rhapsody Book Clubs. Amelia is the author of more than twenty-five books, including the Heirs' Club trilogy and the Rakes of St. James series. She's been happily married to her high school sweetheart for over thirty-five years and she lives on the beautiful gulf coast of Northwest Florida.
Loading...
or
Not Currently Available for Direct Purchase