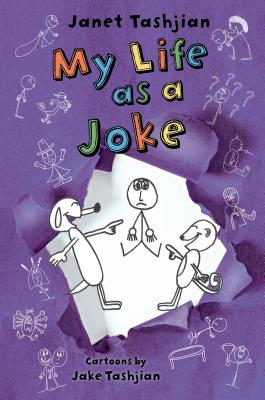 From popular middle-grade novelist Janet Tashjian comes another hilarious installment in the My Life series, with illustrations by Janet's son, Jake Tashjian.

Derek Fallon discovers all the angst that comes with being twelve—he just wants to feel grown up, but life gets in the way with a series of mishaps that make him look like a baby. He passes out during a worm dissection in science class, falls flat on his face in gym class and gets a fat lip that causes him to lisp all day, and his plans for a monster-truck party turn into a bouncy house disaster. Why isn't being in middle school as great as Derek imagined? Thankfully, with a little help from his friends—and, ironically, a Toys for Tots fundraiser—things seem like they could start shaping up at last.

"A kinder, gentler Wimpy Kid with all the fun and more plot." —Kirkus Reviews, starred review on My Life as a Book

"Give this to kids who think they don't like reading. It might change their minds." —Booklist, starred review on My Life as a Book

"A kinder, gentler Wimpy Kid with all the fun and more plot." —Kirkus Reviews, starred review on My Life as a Book

"A fast-moving plot and relatable protagonist make this stand-alone sequel a good choice for boys who, like Derek, would rather reach for a TV remote or game controller than a book." —School Library Journal on My Life as a Stuntboy