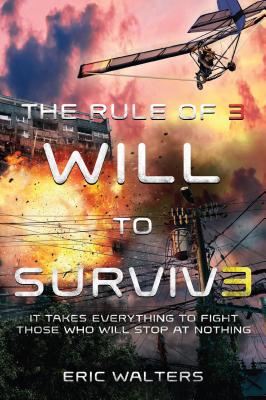 Will to Survive is the gripping conclusion to the acclaimed Rule of Three trilogy from Eric Walters about one suburban neighborhood's existence after a global blackout. Teenager Adam Daley has killed again. It had to be done, part of him knows that, but murder changes a person. It can certainly change a kid who's already grown up too quickly, too harshly, in the wake of the catastrophic global shutdown four months ago. In the name of safety and survival, Adam and his neighbors have turned their middle American community into a fortress, defending against countless enemies. But what's lurking in the dark is a greater danger than ever before: somebody who wants to destroy the neighborhood and Adam at any cost. Soon, the hunted will have to become the hunter . . . and Adam hates himself for what he will have to do. Because sometimes even the dark is not cover enough for things that would never happen in the light.

Praise For The Rule of Three: Will to Survive…

The Rule of Three:

"Fantastic, compelling, unforgettable! . . . Makes The Walking Dead look like a walk in the park." —Alexander Gordon Smith, author of the Escape from Furnace series

"There's no zombie plague or nuclear war—a computer virus destroys modern technology, and people do the rest. . . . The detailed content is more than worth it, capturing the nitty-gritty of rebuilding—and defending—civilization. Perfect for aspiring doomsday preppers and survivalists." —Kirkus Reviews

The Rule of Three: Fight for Power:

Eric Walters, a former elementary school teacher, is a bestselling children’s author in Canada. He is the founder of Creation of Hope, which provides care for orphans in the Makueni district of Kenya. His recent books include The Rule of Three series and Nothing to Fear.
Loading...
or support indie stores by buying on