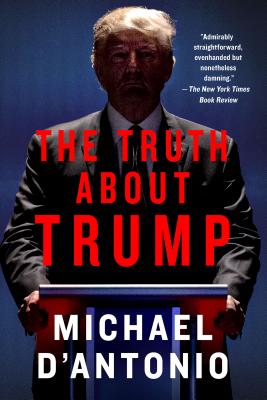 The Truth About Trump

For all those who wonder, "Just who is Donald Trump?",
The Truth About Trump supplies the answer.

Drawing upon exclusive interviews and exhaustive research, Pulitzer Prize-winning reporter Michael D'Antonio presents Trump's full story, from his beginnings as a businessman to his juggernaut presidential campaign. Along the way, D'Antonio charts the successes and failures, scandals and triumphs, and relentless pursuit of money and fame that have made Trump who he is today. D'Antonio also details the origins of the Trump family fortune, Trump's history of using politics to get ahead, and how he has mastered the media to turn publicity into power.

First published in 2015, and now updated to cover Trump's rise to political prominence, The Truth About Trump is an unsparing, eye-opening account of the life and career of the most talked-about man in America.

“A brisk and entertaining read, drawing on interviews and documents and distilling decades' worth of news coverage to tell the story of Trump's childhood, family, business deals, and political forays.” —The Washington Post


Praise For The Truth About Trump…

“A brisk and entertaining read, drawing on interviews and documents and distilling decades’ worth of news coverage to tell the story of Trump’s childhood, family, business deals and political forays.” —The Washington Post

“A carefully reported and fair-minded account. … [D’Antonio] has pulled together Trump's story, subjected it to some fact-checking and dissected a string of business deals that display his drive to win, his thirst for money, his willingness to push boundaries and his apparently endless quest for publicity.” —USA Today

As part of a team of journalists from Newsday, MICHAEL D'ANTONIO won the Pulitzer Prize for his reporting before going on to write many acclaimed books, including Atomic Harvest, The State Boys Rebellion, and The Truth About Trump. He has also written for Esquire, The New York Times Magazine, and Sports Illustrated. He lives in New York.
Loading...
or support indie stores by buying on