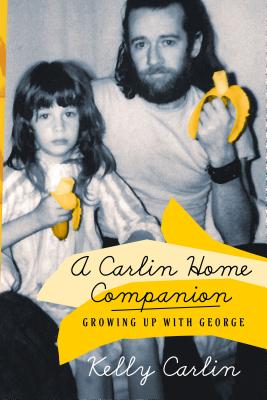 
Praise For A Carlin Home Companion: Growing Up with George…

“[A] sensitively observed portrait...Kelly writes about the family dynamics unblinkingly, and while the book is clearly a deeply felt love letter to her dad, there are hints of the dark side of being raised by a celebrity truth-teller.” —New York Times Book Review

“It is written in the DNA of a Carlin, honest, biting, savage, funny, sad, dark, and profound…Hold on; like George Carlin, this book gives you a hell of a ride.” —Lewis Black

“Kelly's stories are hilarious and so personal, at times felt like I was reading her diary. For anyone that's has ever not been sure who they are, this book is for you.” —Jay Mohr

“Kelly Carlin shines a light on George Carlin, and gives great insight into a man who was a hero to many, but a father to one.” —Bill Maher

“Kelly tells a much-needed, revealing story about what it means to grow up in the shadow of fame.” —Booklist

“Kelly Carlin has humanized her father, in a way that doesn't hold back and through her brilliant writing, brings him to life in a whole new way.” —Lizz Winstead

“A heartwarming, hysterical read!” —Kevin Smith
“A must for fans who want to understand the legend behind the mic” —Mother Jones

“A funny, honest, and compassionate account of growing up with a master of comedy.” —Kirkus Reviews

Kelly Carlin was born in Ohio in 1963. She received her Master's Degree from Pacifica Graduate Institute. She presently tours her critically acclaimed solo show, "A Carlin Home Companion," hosts two radio shows—The Kelly Carlin Show on SiriusXM and Waking from the American Dream on SModcast Network, and blogs for the Huffington Post. She lives in Los Angeles with her husband, Bob McCall and their Jack Russell Terrier, Stella.
Loading...
or support indie stores by buying on