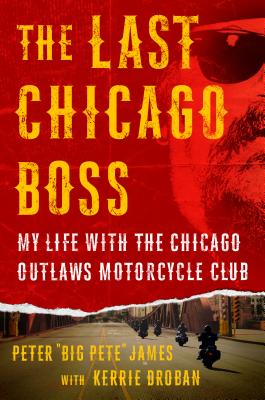 My Life with the Chicago Outlaws Motorcycle Club

A legend in the biker community, Peter “Big Pete” James was the most revered gangster in the Outlaw Nation. He first perfected his skills with the Hells Angels, the Outlaws’ chief rival, before persuading thousands of disgruntled members from splintered Outlaws chapters to unite. Together, they formed a powerful criminal syndicate involved in extortion, contract murders, drugs and arms trafficking, money laundering and assassinations. Then a shocking medical diagnosis knocked James sideways, forcing him to face a new life on the outside of the organization he built, dodging snitches, federal law enforcement, and contract hits.

In The Last Chicago Boss, James provides a startling and unprecedented expose into the inner workings of the Outlaw Nation from the unique perspective of its renowned leader, all brought to life through never-before-revealed interviews, police files, wiretaps, recordings, and trial transcripts.


Praise For The Last Chicago Boss: My Life with the Chicago Outlaws Motorcycle Club…

Praise for The Last Chicago Boss:

“As a veteran of the outlaw biker world, The Last Chicago Boss took me back. It’s purely authentic, hard-hitting, and a riveting read that I would recommend to anyone who wants to know more about this fascinating, uniquely American subculture. Great job, Pete.” —George Christie, author of Exile On Front Street

Praise for Vagos, Mongols, and Outlaws:

“Absorb Vagos, Mongols, and Outlaws as one part juicy scoop, one part machismo on parade, and Falco can take some sad and beautiful snapshots.” —The Boston Globe

"Falco rose to 'officer' status in three biker gangs, and his book – Vagos, Mongols, and Outlaws: My Infiltration of America's Deadliest Biker Gangs – is the more polished, measured and authoritative of the two.” —Los Angeles Times comparing to George Rowe's Gods of Mischief

"A down-and-dirty memoir that should appeal to readers of such books as Sonny Barger's Hell's Angel (2001) and Hunter S. Thompson's classic Hell's Angels (1967)." —Kirkus Reviews

"One of the most extraordinary true-crime autobiographies." —The Sydney Morning Herald

Praise for Running with the Devil:

"Kerrie Droban is a brilliant and talented author and the book is a compelling masterpiece of contemporary nonfiction." —Burl Barer, Edward awarding winning author and host of Outlaw Radio.

KERRIE DROBAN is the co-author of Prodigal Father, Pagan Son: Growing Up Inside the Dangerous World of the Pagans Motorcycle Club and author of Running with the Devil: The True Story of the ATF’s Infiltration of the Hells Angels, winner of the USA Book News National Book Award for Best Memoir/Autobiography and two-time winner for their True Crime award. She is a criminal defense attorney in Arizona.

PETER “BIG PETE” JAMES was known as the "Godfather" of the Chicago Outlaws Motorcycle Club having formed and commanded a coalition of 38 motorcycle clubs and 8 Outlaw Motorcycle Club Chapters in the Chicagoland area in his twenty year career.
Loading...
or
Not Currently Available for Direct Purchase